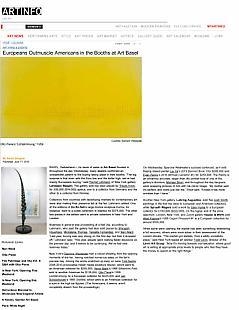 BASEL, Switzerland— As news of sales at Art Basel flooded in throughout the day Wednesday, many dealers confirmed an unexpected pattern to the buying taking place in their booths. "The big surprise is that even with the Euro low and the dollar high, we've had mainly Europeans buying," said Rachel Lehmann of New York gallery Lehmann Maupin. The gallery sold two neon pieces by Tracey Emin, for £50,000 ($74,000) apiece, one to a collector from Germany and the other to a collector from Norway.

Collectors from countries with developing markets for contemporary art were also making their presence felt at the fair, Lehmann added. One of the editions of Do Ho Suh's large bronze sculpture Karma, for instance, went to a public collection in Istanbul for $375,000. The other two pieces in the edition went to private collectors in New York and London.

Business in general was proceeding at a fast clip, according to Lehmann, who said the gallery had also sold pieces by Shirazeh Houshiary, Mickalene Thomas, Teresita Fernandez, and Nari Ward. "Last year, buying was very strong on the first day, but then it dropped off," Lehmann said. "This year, people were making faster decisions on the preview day, and it seems to be continuing. We've had new reserves today."

New York's Sperone Westwater had a robust showing from the opening moments of the fair, having notched numerous sales on the fair's preview day. Among the works snatched up early on were Tom Sachs' 2008-2010 provocative mixed media sculpture Master, which went to an American collector for $200,000; Heinz Mack's 1966 Silberlicht-Feld, sold to another American for $135,000; Otto Piene's 1959 Lichtströmung, to a European collector for $225,000; and Jan Schoonhoven's 1965 Untitled, which went to an American collection for a sum in the high six-figures. (The Americans, it seems, aren't completely absent from the proceedings)

On Wednesday, Sperone Westwater's success continued, as it sold Beijing-based painter Liu Ye's 2010 Banned Book 3 for $200,000 and Evan Penny's 2010 Michael (variation #1) for $250,000. The Penny is an uncannily accurate, larger-than-life portrait bust of one of the gallery's directors, Michael Short, and throughout the day fairgoers were snapping pictures of him with his mirror image. "My mother said it's perfect, and looks just like me," Short said. "Except it has more wrinkles than I have."

Another New York gallery, Luhring Augustine, sold five Josh Smith paintings in the first two days to European and American collectors, while Sprueth Magers sold a work by Gary Hume to a European collector for £150,000 ($222,000). On the higher end of the price spectrum, London, New York, and Zurich gallery Hauser & Wirth sold Allan Kaprow's 1956 Caged Pheasant #1 to a European collection for around $500,000.

While some were claiming the market has seen something resembling a full recovery, others were more sober in their assessment of the current climate. "The market got realistic, from a wildly unrealistic place," said New York-based art advisor Todd Levin, director of the Levin Art Group. "Now it's moving towards normalization, where good art is selling at appropriate price levels to people who feel they have the money to spend on the right things."