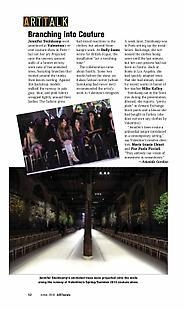 Branching into Couture
By Amanda Gordon

Jennifer Steinkamp went unnoticed at Valentino's recent couture show in Paris – but not her art. Projected onto the uneven, ancient walls of a former rectory were nine of her animated trees, featuring branches that twirled around the trunks, their leaves rustling. Against this backdrop, models walked the runway in pale gray, blue, and pink fabrics wrapped tightly around their bodies. The fashion press had mixed reactions to the clothes, but adored Steinkamp's work. As Dolly Jones wrote for British Vogue, the installation "set a ravishing tone."

The collaboration came about hastily. Some two weeks before the show, an Italian fashion writer (whom Steinkamp had never met) recommended the artist's work to Valentino's designers. A week later, Steinkamp was in Paris setting up the installation. Backstage, she witnessed the clothes being sewn until the last minute, but her own process had not been so frantic. Back at home in Los Angeles, she had quickly adapted trees that she had already made, for recent works in honor of her teacher Mike Kelley.

Steinkamp sat in the front row during the presentation, dressed, she reports, "pretty plain" in Armani Exchange black pants and a blouse she had bought in Turkey (she does not own any clothes by Valentino).