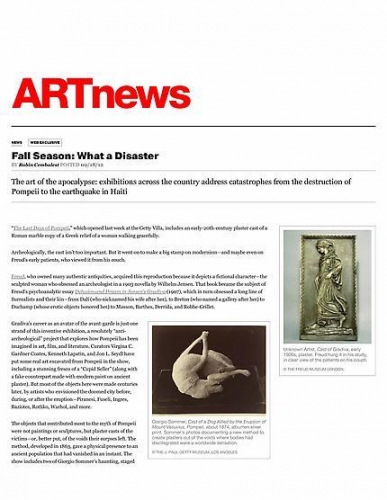 Fall Season: What a Disaster
By: Robin Cembalest

“The Last Days of Pompeii,” which opened last week at the Getty Villa, includes an early-20th-century plaster cast of a Roman marble copy of a Greek relief of a woman walking gracefully.


Archeologically, the cast isn’t too important. But it went on to make a big stamp on modernism—and maybe even on Freud’s early patients, who viewed it from his couch.

Gradiva’s career as an avatar of the avant-garde is just one strand of this inventive exhibition, a resolutely “anti-archeological” project that explores how Pompeii has been imagined in art, film, and literature. Curators Virgina C. Gardner Coates, Kenneth Lapatin, and Jon L. Seydl have put some real art excavated from Pompeii in the show, including a stunning fresco of a “Cupid Seller” (along with a fake counterpart made with modern paint on ancient plaster). But most of the objects here were made centuries later, by artists who envisioned the doomed city before, during, or after the eruption—Piranesi, Fuseli, Ingres, Baziotes, Rothko, Warhol, and more.

The objects that contributed most to the myth of Pompeii were not paintings or sculptures, but plaster casts of the victims—or, better put, of the voids their corpses left. The method, developed in 1863, gave a physical presence to an ancient population that had vanished in an instant. The show includes two of Giorgio Sommer’s haunting, staged photos of the original plasters, shot between 1874 and 1880, that caused a worldwide sensation. These ghostly forms recur in The Dog from Pompei (1991), Allan McCollum’s casts of casts of casts of the ill-fated canine, and Rauschenberg’s Small Rebus, a 1956 collage incorporating Sommer’s photo of the same creature.

The meaning of Rauschenberg’s dog is disputed; Seydl suggests it embodies the threat of nuclear war. Inevitably, the show argues, the art imagining this spectacular lost-and-found city reflects anxieties about our own. “Despite all that has changed in the past two millennia, this is the event that could happen again and with much the same consequences,” write Getty director Timothy Potts and David Franklin, director of the Cleveland Museum (where the show travels before arriving at Quebec’s Musée national de beaux-arts) in their co-authored catalogue introduction.

Of course it does happen, and that reality is sadly clear in a number of shows responding to more recent disasters this season. In New York, at Lehmann Maupin’s Chelsea space, the Japanese artist Mr. has assembled a poignant meditation on the earthquake and tsumani that devastated his country’s Tōhoku region last year. Its medium is the materials the artist began collecting after the tragedy: forlorn books, tattered clothes, broken toys, smashed furniture, dilapidated instruments, cracked computers, and many, many more personal belongings that were strewn across the disaster zone. He had the lot shipped to New York, where he fused them into a chaotic installation—almost like a giant organism—intended to symbolize the collective desperation of the people left behind. The central form is shaped like a caterpillar: hence the show’s title, “Metamorphosis: Give Me Your Wings,” lamenting Japan’s inability to emerge and fill its promise in the postwar era.

Then there’s Concordia, Concordia, Thomas Hirshhorn’s massive piece at Gladstone on 21st Street, inspired by the sinking of an Italian cruise ship earlier this year. The scene is definitely a disaster. The installation—which the viewer cannot enter—is a huge jumble of furniture, gear, kitschy decorations, and humble materials that stand in for the high-tech innards of the ship, threatening to collapse further at any moment.

To Hirschhorn, the piece is less a meditation on tragedy than stupidity: the hubris of the captain in veering too close to shore; his decision to abandon ship. Focusing on this, rather than the loss of life, the artist has created a manic paean to the distinctive flashy esthetic of the modern cruise ship, as if a Red Grooms had exploded to a Raymond Scott soundtrack.

High above, looking ready to tumble from the ceiling (or is it the floor), is a battered reproduction. Alert viewers will peg it as Gericault’s Raft of the Medusa (1818-19), the famous work that brought international attention to another notorious shipwreck and is diminished here to generic cruise-ship decoration. Such is the fate of classic history painting in Chelsea these days. Around the corner, at Newman Popiashvili, Guernica doesn’t fare much better—it’s been copied in ballpoint and crumbled up in a giant ball, part of Javier Arce’s arch installation about Picasso’s masterpiece.

The role of art as document, catharsis, elegy, and inspiration in times of disaster is nowhere more clear than in a show that opened a few days after “Pompeii” in another part of L.A.: “In Extremis: Death and Life in 21st-Century Haitian Art,” at UCLA’s Fowler Museum. Exuberant and heart-rending, raw and brash, mournful and scary, the exhibition (which travels to Quebec’s Musée de la civilization), features works dating back to the mid-20th century, but mostly from this one, when a series of catastrophes—most tragically, but not most recently, the 2010 earthquake—shattered the nation.

Chronicles of the destruction have become common in popular Haitian art, and the Fowler has some stunning examples: Evelyne Alcide’s Séisme (2010), a painting with multi-hued beads rendering a scene of crushed bodies, makeshift graves, detached limbs; and Myrlande Constant’s intricate, Boschian Haiti, madi 12 janvye 2010, a beaded tableau commissioned by the museum.

The show’s theme, though, is how these accumulated catastrophes have affected images of Haiti’s gods, particularly the Gedes, trickster deities of the vodou pantheon. The curatorial team, lead by Donald J. Cosentino, traces how imagery of the Gede—god of death, of resurrection, of sexuality—has become more intimidating, aloof, disconnected from the populace whose unrepressed desires he traditionally represented.

The change is clear in paintings by Edouard Duval-Carrié and Didier Civil, where the deity is almost kabuki-like in his detachment; in sculptures by André Eugène, Jean Hérard Celeur, and Frantz Jacques Guyodo, among others, who create their sinister, rambunctious figures with industrial castoffs topped by human skulls.

Cosentino describes these works as “Post-apocalyptic arts,” a term that aptly reflects the visceral, hellish reality they convey. But the phrase, he concedes, only works up to a point. In Haiti, the apocalypse is still going on.