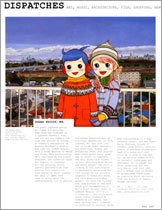 The young Japanese artist Mr. takes his peculiar name from the nickname of a Japanese baseball star, and his art too takes a lot from the culture of fandom. He recently emerded out of Takashi Murakami's studio, and like his former master, he's a great devotee of manga and anime. More particularly, he's intrigued by its sugary excesses, the infantile vogue for 'kawaii,' or cuteness. All the grinning little cartoon personalities that clutter this subculture look benign at first glance, but many in Japan have come to worry about the reclusiveness, not to mention the sexual proclivities, of its older obsessives. In this context, Mr. may look like one of those stern opponents: his paintings, videos and sculptures often show figures with their pants down, grown me in thrall to nymphets, and many works have shades of Paul McCarthy, Mike Kelley and Henry Darger. Yet critics looking at his contribution to Murakami's celebrated New York survey of the artistic response to manga and anime, the 2005 show "Little Boy," weren't too sure how to read him, and looking at the work which will be appearing in Mr.'s first US solo show at Lehmann Maupin, it's still a tough call. "You Girls" shows young ladies enthused by something off-camera, but what excites their interest is difficult to discern, given that the backdrop is a flat suburban sprawl. And "New Tokyo Ferry Terminal (Ariake 4-chrome)," from 2004-5, consists simply of the huge disembodied head of a young girl that tilts up to gaze at the sky, her saucer-size eyeballs full of fantastic landscapes and seascapes. Mr's images are often unnerving, but one only has to look into that girl's dreamy eyes to wonder if he believes there might be something worth salvaging from the culture of 'kawaii.'
Morgan Falconer