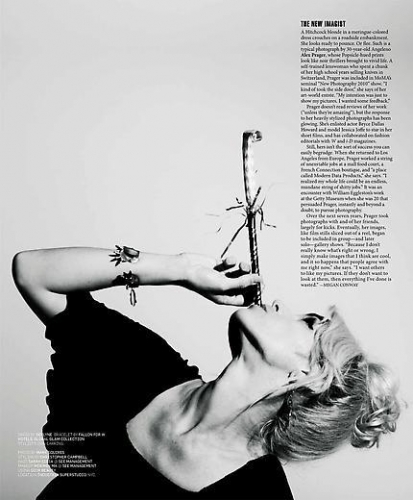 
For our fourth annual New Regime Portfolio, BlackBook presents an explosive mix of curatorial savants, razor-sharp comedians, genre-defying musical acts, screen saviors, fashion visionaries, literary geniuses, and one of the Glee kids, each of whom would like you to know that, despite global warming, the global financial crisis, and the global embrace of a girl named Snookie, this new year will, in fact, be better than the last.

A Hitchcock blonde in a meringue-colored dress crouches on a roadside embankment. She looks ready to pounce. Or flee. Such is a typical photograph by 30-year-old Angeleno Alex Prager, whose Popsicle-hued prints look like noir thrillers brought to vivid life. A self-trained lenswoman who spent a chunk of her high school years selling knives in Switzerland, Prager was included in MoMA’s seminal “New Photography 2010” show. “I kind of took the side door,” she says of her art-world entrée. “My intention was just to show my pictures. I wanted some feedback.”


Prager doesn’t read reviews of her work (“unless they’re amazing”), but the response to her heavily stylized photographs has been glowing. She’s enlisted actor Bryce Dallas Howard and model Jessica Joffe to star in her short films, and has collaborated on fashion editorials with W and i-D magazines.

Still, hers isn’t the sort of success you can easily begrudge. When she returned to Los Angeles from Europe, Prager worked a string of unenviable jobs at a mall food court, a French Connection boutique, and “a place called Modern Data Products,” she says. “I realized my whole life could be an endless, mundane string of shitty jobs.” It was an encounter with William Eggleston’s work at the Getty Museum when she was 20 that persuaded Prager, instantly and beyond a doubt, to pursue photography.


Over the next seven years, Prager took photographs with and of her friends, largely for kicks. Eventually, her images, like film stills sliced out of a reel, began to be included in group—and later solo—gallery shows. “Because I don’t really know what’s right or wrong, I simply make images that I think are cool, and it so happens that people agree with me right now,” she says. “I want others to like my pictures. If they don’t want to look at them, then everything I’ve done is wasted.”