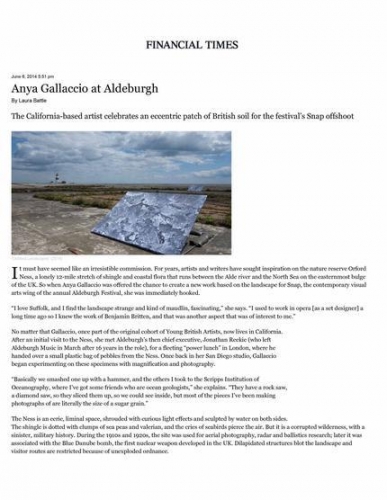 
It must have seemed like an irresistible commission. For years, artists and writers have sought inspiration on the nature reserve Orford Ness, a lonely 12-mile stretch of shingle and coastal flora that runs between the Alde river and the North Sea on the easternmost bulge of the UK. So when Anya Gallaccio was offered the chance to create a new work based on the landscape for Snap, the contemporary visual arts wing of the annual Aldeburgh Festival, she was immediately hooked.


“I love Suffolk, and I find the landscape strange and kind of maudlin, fascinating,” she says. “I used to work in opera [as a set designer] a long time ago so I knew the work of Benjamin Britten, and that was another aspect that was of interest to me.”


No matter that Gallaccio, once part of the original cohort of Young British Artists, now lives in California. After an initial visit to the Ness, she met Aldeburgh’s then chief executive, Jonathan Reekie (who left Aldeburgh Music in March after 16 years in the role), for a fleeting “power lunch” in London, where he handed over a small plastic bag of pebbles from the Ness. Once back in her San Diego studio, Gallaccio began experimenting on these specimens with magnification and photography.


“Basically we smashed one up with a hammer, and the others I took to the Scripps Institution of Oceanography, where I’ve got some friends who are ocean geologists,” she explains. “They have a rock saw, a diamond saw, so they sliced them up, so we could see inside, but most of the pieces I’ve been making photographs of are literally the size of a sugar grain.”


The Ness is an eerie, liminal space, shrouded with curious light effects and sculpted by water on both sides. The shingle is dotted with clumps of sea peas and valerian, and the cries of seabirds pierce the air. But it is a corrupted wilderness, with a sinister, military history. During the 1910s and 1920s, the site was used for aerial photography, radar and ballistics research; later it was associated with the Blue Danube bomb, the first nuclear weapon developed in the UK. Dilapidated structures blot the landscape and visitor routes are restricted because of unexploded ordnance.


Drawing on previous works, including her large-scale photographs of particles of dirt from Arthur’s Seat, the main peak of a group of hills in Scotland, and “Silver Seed”, a study of the seeds of the giant sequoia tree, Gallaccio has produced large-scale black-and-white images of the pebbles. These will be displayed on angled billboards on the Ness and at Snape Maltings, the festival’s hub. As well as referencing the site’s violent past, and the centenary of the first world war, the work will relate to concerns about climate change and coastal erosion.


“You’ll have this experience of looking down on this image, a landscape within a landscape,” she explains. “The image will make more sense the further away you are from it, which is counter to the normal way of looking at an art work in a gallery, where you come close to see the detail.”


Now in its fourth year, Snap was masterminded by Abigail Lane and Sarah Lucas, two YBA artists now living in the local area, under the umbrella of Aldeburgh Music. In previous years, artists have been presented with a range of exhibition spaces at Snape Maltings, encouraging them to consider the immediate environment.


Gallaccio was born in Paisley, Scotland, in 1963 but moved to London to study at Kingston Polytechnic, then at Goldsmiths College. After taking part in the now legendary Freeze exhibition, organised by Damien Hirst in 1988, she launched herself into the public eye two years later with “Prestige”, an installation at Wapping Pump Station consisting of 24 kettles through which compressed air was forced to create unsettling sounds. Since then, much of her work has focused on natural materials and the outside world. In 1998, for a piece titled “Two Sisters”, she erected a 60-ton column of chalk and plaster in Hull docks; in 2008, she installed a large section of a horse chestnut tree in Camden Arts Centre in north London. She has also expressed an interest in the work of Robert Smithson – but does she consider herself a land artist?


“I’m happy to have labels stuck on to me but I don’t go out thinking that consciously,” she replies. “I just seem to keep returning to different types of landscapes and spaces, which is in part why I moved to California, because I wanted to see how my work would change by being confronted by a different kind of landscape.”


In recent years, Gallaccio has forged a fruitful relationship with Jupiter Artland, a sculpture park in a private estate outside Edinburgh. Two years ago she was commissioned to create “The Light Pours Out of Me”, a “contemporary folly” inspired by the enthusiasm for grottoes in the UK during the 18th century and comprising a 3 sq metre sunken chamber lined with amethyst.


This summer she returns to Jupiter with “Stroke” (1994), an installation that involves painting chocolate on to the gallery walls then leaving it to scent the room, discolour and decompose. For Gallaccio the creative processes – often collaborative – and the choice of the materials used for each work are significant to its final meaning. So is she particular about the chocolate used? “It has to be delicious, yes,” she laughs. “It has to have a minimum of 70 per cent cocoa solids, so it’s very high-end chocolate to start off with. Then I mix it with a tiny bit of coconut oil, or vegetable oil, just to help me brush-paint it.”


Themes of fragility and flux feature prominently in Gallaccio’s work. For one of her best-known pieces, “Preserve ‘Beauty’ ” (1991-2003), she pressed 2,000 red gerberas under glass frames and allowed them to rot. And in 1996 she created “Intensities and Surfaces”, a vast cube of ice bricks, which gradually melted around a central lump of rock salt. Of course, this means much of her work is inherently uncommercial, difficult to display and consume, and she admits it “looks terrible at art fairs”. It seems telling that she lost out on the 2003 Turner Prize to Grayson Perry, an artist who has since been feted for his eminently collectable ceramics.


“My logic is that a good gallerist can sell anything, and you can take that any way you like, positive or negative, in terms of some of my contemporaries and myself,” Gallaccio says.


“When I started working in the late 1980s, early 1990s there was only a handful of art fairs, it wasn’t such a big deal so you didn’t have to make works that could perform. Now it feels as if even the commercial galleries are suffering, in that there are so many art fairs, the serious collectors and curators, even, are going to the art fairs and the biennales rather than going to the galleries. So everything’s changed radically, and maybe I haven’t come up with a new strategy,” she adds, and yet in doing so she misses the point. The very fact that Gallaccio remains unshackled by “strategy” makes her one of the most interesting – and individual – artists of her generation.