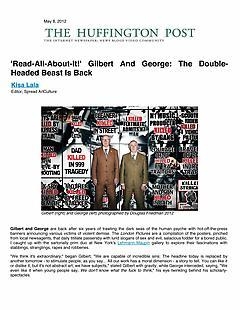 'Read-All-About-It!' Gilbert And George: The Double-Headed Beast Is Back
By Kisa Lala

Gilbert and George are back after six years of trawling the dark seas of the human psyche with hot-off-the-press banners announcing various victims of violent demise. The London Pictures are a compilation of the posters, pinched from local newsagents, that daily titillate passersby with lurid slogans of sex and evil, salacious fodder for a bored public. I caught up with the sartorially prim duo at New York's Lehmann Maupin gallery to explore their fascinations with stabbings, stranglings, rapes and robberies.

"We think it's extraordinary," began Gilbert, "We are capable of incredible sins: The headline today is replaced by another tomorrow - to stimulate people, as you say... All our work has a moral dimension - a story to tell. You can like it or dislike it, but it's not abstract art; we have subjects," stated Gilbert with gravity, while George interceded, saying, "We even like it when young people say, We don't know what the fuck to think," his eye twinkling behind his scholarly-spectacles.

G&G were distraught by the growing stacks of 3,000 posters in their studio. As artists they are disciplined and disturbed at the same time; they sensed ripples left behind by each tragedy through the victims, neighbours and relatives they affected. "If you have a family member in prison, the shame of it lasts generations. If you're shopping the next day, what do you tell the shop where you buy milk?"

The media mirrors the anxieties of the masses but also feeds its hunger. In more liberal societies, the stories form moral edicts of what not to do, of what could happen, noisome reminders of our primitive failings. "It's the price we pay for our freedom," summarizes George. "It happens elsewhere too, Africa, China, though not as much reported... We are all complicit," concludes Gilbert. The two are in the habit of finishing each other's thoughts.

So with all the turmoil and mayhem, what karmic price will our species pay? Are we heading towards a successful balance? George responds without hesitation, "The world has never been a better place, especially the Western world." The youth are better informed; there is an acceptance of diversity with nations better connected around the world.

We digressed briefly into non-Western tangents: Whorehouses in Bangladesh and the linguistic absences of words relating to sex there. On their visit to India some twenty years ago, they recalled the English names of these ghettos: "In Mumbai it's called Falkland Road, and in Delhi, it's UK Road. In some places you walk by and the prostitutes lift their dresses and clearly you can see they are boys who have had their penis removed. It looks like a cat's bum..."

G&G claim that they are two people but one artist. But, what about thinking outside that box? Like the Chapman Brothers splitting up to inspire different works. Perhaps a game of exquisite corpses?

"We don't have a problem with that." They nod in agreement. "We think we're in the box, we're in the world, and the surface of the world comes out under our feet. We accept the two together," says George.

One brain, is it?

"A double-headed monster. We accept the limitations. And the advantages," Gilbert chimes in.

There is strength in unity, but isn't it far braver to be alone against the world? Here I am alone facing the two of you, I say.

"We are alone against the world. Well, there are a lot of lonely artists out there, and we don't have to be part of that. Don't you think, George?"

We talk about the frenzy the media stirs up with its headlines, the mob mentalities that override individual morals. "Herd instinct. The media controls the herd instinct...with milk," jests George, "We have a miniature herd instinct of just two."

G&G have filled a section of their library with the writings of theosophists. Recently they drew upon the works of Lord Dowding who communicated with dead pilots from WW2 and wrote some fascinating accounts of 'messages' he received from his psychic explorations.

Did they believe in an afterlife?

George shakes his head no, "We do believe in the real afterlife. We say my 'late aunt' or 'late uncle', but nobody says the late Van Gogh, or the late Charles Dickens, because they are not completely dead, and still available to us."

"We like the spirit of photographs and buildings, of trees," Gilbert echoed, "The past is there all the time; the brain keeps everything; [we like] a sense of leaving something behind: A living culture. No, we don't need another life. One's enough."

You put yourself in your art, I said. Is that a cult of personality you've developed for posterity? Van Gogh didn't place himself peeking out from his haystacks.

"He did in his own way. His spirit. Every haystack in the country is the same, only his haystack means something," George clarified.

"It's his suffering. He was a religious maniac, sexual, twisted in some ways," Gilbert adds.

But it's Van Gogh's hand. And you don't believe in intervening with your hand, I say. He suffered, but didn't do it for the public.

"We started out as living sculptures," Gilbert continued. "It's us saying that we suffer, we are in love."

"We are a sex beast, we are leaving ideas behind," grinned George. "To whatever person you leave a letter to, you always sign your name. These are visual love letters."

Greek sculptures have no signatures. People might not know the history of your personas two hundred years from now. How will they stand up, I ask.

"They will still know how we look like," said Gilbert optimistically.

They will judge you based on what you look like, I offer with a grin, gesturing at the works around us, their haunting faces peering at us from all sides.

"What a horrible thing to be doing," said George deadpan.

They have changed over their 40 years working together. You have had an impact, I say.

"I am sure we did," said George. "We have evolved," concurred the double-headed beast.

Did being queer and English strengthen their bond? George answered, "We are not so keen on the common word gay, which is stolen from Eighteenth century prostitutes in London, the gay ladies, because they had a lot of colours."

"And homosexual is a quasi-medical term from Hungary, used to put people in prison," claimed Gilbert.

Though they recognize the need for minority groups seeking a platform to express their views, G&G do not feel a need for that syntax in defining their own work. It's not for them they say.

"Sex is important," they readily agree. Then, after a pause, Gilbert archly adds, "Even in the art world, we realized art critics are all closet homophobes."

"Especially the educated ones," added George with a hint of mischief.

Have they noticed an evolution in that thinking? "Yes, people won't throw tea at you in cafes now -- yes, we remember that..."