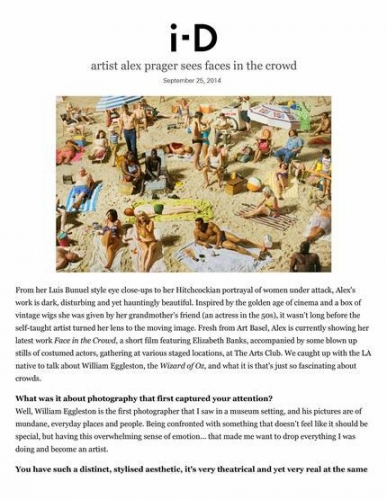 
From her Luis Bunuel style eye close-ups to her Hitchcockian portrayal of women under attack, Alex's work is dark, disturbing and yet hauntingly beautiful. Inspired by the golden age of cinema and a box of vintage wigs she was given by her grandmother’s friend (an actress in the 50s), it wasn’t long before the self-taught artist turned her lens to the moving image. Fresh from Art Basel, Alex is currently showing her latest work Face in the Crowd, a short film featuring Elizabeth Banks, accompanied by some blown up stills of costumed actors, gathering at various staged locations, at The Arts Club. We caught up with the LA native to talk about William Eggleston, the Wizard of Oz, and what it is that’s just so fascinating about crowds.


What was it about photography that first captured your attention?


Well, William Eggleston is the first photographer that I saw in a museum setting, and his pictures are of mundane, everyday places and people. Being confronted with something that doesn’t feel like it should be special, but having this overwhelming sense of emotion… that made me want to drop everything I was doing and become an artist.


You have such a distinct, stylised aesthetic, it's very theatrical and yet very real at the same time - how did you develop this?


I didn’t go to any of the art schools… I just shot what was interesting to me. I spent about six months shooting black and white street photography, and I had my own little dark room in my bathroom. Then my friend who was also a photographer talked me into doing a dual exhibition and I showed all black and white images plus one colour photograph that I had staged. It was my friend in Griffith Park; I’d put her legs underneath some twigs with only her feet sticking out in these pointy little blue shoes, in reference to the Wizard of Oz, and that picture was the one that sold. So from there I just started experimenting with dressing up my friends and one thing just fed into another.


Has living in Hollywood, with all its rich cinematic history, influenced you as an image-maker?


It definitely influences the work a lot. It’s a strange place, everyone’s shooting a movie or in a movie. All the best looking people from all over the US move over to LA to become a star. There’s this promise of something great, the promise of perfection. Even the landscape is very cinematic, making these false promises. The sky is this crazy colour blue and birds are singing, and then there are the mountains in the backdrop. It’s this perfect image, but then there’s something really fucked up about the city too.


I like drama; I like the feeling and anticipation of drama, or just having escaped something dramatic or life threatening. I kind of feel like that anyway, in small degrees, so I just like to exaggerate those feelings of myself. It’s one way of coping with it.


What is it about crowds that fascinate you most?


I’ve wanted to shoot crowds for a long time, just because of the characters and the energy, and all the colours and textures that you can show with a crowd. But also on a personal level, it’s something I’ve been struggling with for many years. They bring out all sorts of emotions; they exaggerate feelings. If you weren’t in a crowd you might just be able to go about your day, but when you’re surrounded by a sea of anonymous faces you can get so dramatic about how you’re feeling. Nobody cares or notices. Making the film was just being able to show myself that I can control the crowd; that I can be in the crowd and direct it. It was an interesting experience for me, very cathartic.


The crowds are a mixture of friends, family, and strangers, how does that dynamic work?


I like to use my friends and family members and throw them into these groups of hired Hollywood extras. I like to see how they interact with each other. They’re the ones whose characters and costumes stand out; the others are just in their own little universe.


Do you give everyone a brief beforehand or do you allow your characters do develop naturally?


Usually I have a stack of references that I pull, or art books that I’ve tagged for certain characters. Then I’ll send them to my costume designers and we’ll go to the costume houses and find very similar outfits. We like to throw in very contemporary outfits to throw people out of the time and place. It’s really important to me to keep the time ambiguous. That feeling of familiarity, like you’ve seen it before, invites people decide what the image is.


From the sets to the pose of each character, everything about your work is staged meticulously, do you ever allow for the spontaneous?


How did you move from photography to film?


I was having a show in London in 2008 and people in the audience kept on coming up to me and asking about what was happening before and after in the image, and what the story was. So I approached my next work as a series of stills showing the before and after one moment, and then after that I realised that being able to use all the components of filmmaking was really interesting; it allowed me to communicate what I had been trying to say on a more precise level.


I have a show in March in Hong Kong, which I’m working on new stuff for. It’s very different! You’ll see.