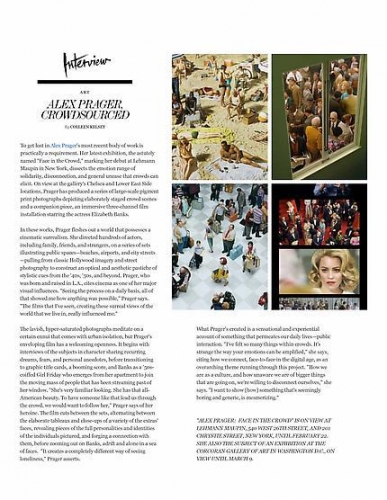 
To get lost in Alex Prager's most recent body of work is practically a requirement. Her latest exhibition, the astutely named "Face in the Crowd," marking her debut at Lehmann Maupin in New York, dissects the emotion range of solidarity, disconnection, and general unease that crowds can elicit. On view at the gallery's Chelsea and Lower East Side locations, Prager has produced a series of large-scale pigment print photographs depicting elaborately staged crowd scenes and a companion piece, an immersive three-channel film installation starring the actress Elizabeth Banks.


In these works, Prager fleshes out a world that possesses a cinematic surrealism. She directed hundreds of actors, including family, friends, and strangers, on a series of sets illustrating public spaces—beaches, airports, and city streets—pulling from classic Hollywood imagery and street photography to construct an optical and aesthetic pastiche of stylistic cues from the '40s, '50s, and beyond. Prager, who was born and raised in L.A., cites cinema as one of her major visual influences. "Seeing the process on a daily basis, all of that showed me how anything was possible," Prager says. "The films that I've seen, creating these surreal views of the world that we live in, really influenced me."


The lavish, hyper-saturated photographs meditate on a certain ennui that comes with urban isolation, but Prager's enveloping film has a welcoming openness. It begins with interviews of the subjects in character sharing recurring dreams, fears, and personal anecdotes, before transitioning to graphic title cards, a booming score, and Banks as a '50s-coiffed Girl Friday who emerges from her apartment to join the moving mass of people that has been streaming past of her window. "She's very familiar looking. She has that all-American beauty. To have someone like that lead us through the crowd, we would want to follow her," Prager says of her heroine. The film cuts between the sets, alternating between the elaborate tableaux and close-ups of a variety of the extras' faces, revealing pieces of the full personalities and identities of the individuals pictured, and forging a connection with them, before zooming out on Banks, adrift and alone in a sea of faces.  "It creates a completely different way of seeing loneliness," Prager asserts.


What Prager's created is a sensational and experiential account of something that permeates our daily lives—public interaction. "I've felt so many things within crowds. It's strange the way your emotions can be amplified," she says, citing how we connect, face-to-face in the digital age, as an overarching theme running through this project. "How we are as a culture, and how unaware we are of bigger things that are going on, we're willing to disconnect ourselves," she says. "I want to show [how] something that's seemingly boring and generic, is mesmerizing."