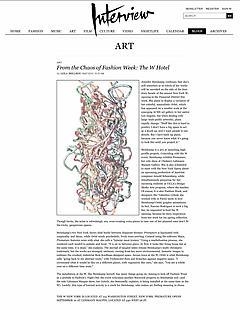 From the Chaos of Fashion Week: The W Hotel
Leila Brillson

Jennifer Steinkamp confesses that she's still uncertain as to which of her works will be unveiled on the side of the four-story facade of the newest New York W, opening in the Financial District this week. She plans to display a variation of her colorful, naturalistic Orbit, which has appeared on a smaller scale at the emerging ACME art gallery in her native Los Angeles, but when dealing with large-scale public artworks, plans rapidly change: "Stuff like this is hard to predict. I don't have a big space to act as a mock up, and I want people to see details. But I have back-up plans, because you never know what it's going to look like until you project it."??

Steinkamp is a pro at launching high-profile projects. Coinciding with the W event, Steinkamp exhibits Premature, her solo show at Chelsea's Lehmann Maupin Gallery. She is also scheduled to meet with the New York Opera about an upcoming production of Austrian composer Arnold Schoenburg, while simultaneously preparing for her incoming students at UCLA's Design Media Arts program, where she teaches. Of course, it is also Fashion Week, and designers like Valentino (whom she worked with in Paris) seem to love Steinkamp's bold, graphic animations. In fact, Narciso Rodriguez is such a big fan, he requested to host the W opening, because he drew inspiration from her work for his spring collection. Though hectic, the artist is refreshingly zen, even creating extra pieces in case one of her planned ones don't fit the tricky, gargantuan spaces.??

Steinkamp's two New York shows slide busily between disparate themes: Premature is fascinated with corporality and decay, while Orbit sends psychedelic, lively trees swirling. Created using the software Maya, Premature features veins with what she calls a "tubular meat texture." Using a marbelization process, she rendered each tendril to pulsate and twist. "It is an in-between piece. At first, it looks like living tissue but at the same time, it is dead," she explains. The myriad of tangled tubes retains Steinkamp's multi-chromatic trademark, but the works are strangely ominous, veering from her more environmental, fantastic images to embrace the crooked, industrial Rem Koolhaas-designed space. Across town at the W, Orbit is what Steinkamp calls "going back to my abstract roots," with Technicolor flora and branches against negative space. "I envisioned what it would be like on a different planet, with vegetation like ours," she says. "You see a whole year on a different time scale."??

The installation at the W, like Steinkamp herself, has many things going on. Aiming to kick off Fashion Week as a prelude to Fashion's Night Out, the event welcomes another Starwood property to Manhattan soil—and the solo Lehmann Maupin show, too (which, she bemusedly explains, is being installed at the same time as the W). Luckily, this type of harried activity is a cinch for Steinkamp, who makes art finding meaning in chaos. ???