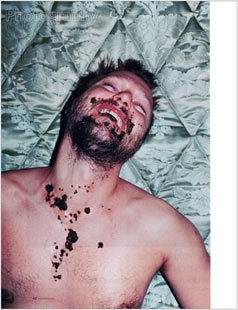 IT'S HARD TO TAKE Juergen Teller seriously, but that's part of his appeal. Teller doesn't take himself too seriously either. He's a joker, a prankster, sometimes a buffoon. He became famous as a fashion photographer in the 1990s, when artists (including Corinne Day, Wolfgang Tillmans, Jack Pierson, Nan Goldin and Terry Richardson) and magazines (The Face, i-D, Dutch, Dazed & Confused, Index) that had little or no use for the genre's conventions were scrapping them and starting over from scratch. Mocking fashion's snobbism and superficiality, Teller and his fellow mavericks made work that was cheeky, funny, street smart and much more about the model's attitude than the clothes she wore. Or didn't wear. Teller's most notorious photos, from 1996, are of model Kristen McMenamy wearing nothing but jewellery; inside a crude lipstick heart drawn between her breasts is the name Versace, written in eyebrow pencil. Glamour survived these attempts to debunk it, but Teller had made his mark and established a reliably, often hilariously, perverse career in fashion photography that continues most conspicuously in his ad campaign for Marc Jacobs.

There's scant evidence of that career in the Teller exhibition that opens at Fondation Cartier in Paris this month, where the nudity on display will be primarily his own. Titled Do You Know What I Mean, the show includes frankly autobiographical work, some of which was on view at New York's Lehmann Maupin Gallery in January, and finds Teller delving deeper into personal and national history. Though the photographer has been based in London since 1986, he was born in Germany in 1964 and is returning to his roots in the countryside near Nuremberg more and more these days. His mother, his family home at Bubenreuth and the flashlit interiors of a nearby cavern have cropped up in pictures over the years, but Teller's most recent images of the local landscape were made in and around the abandoned Nazi parade grounds at Nuremberg. Site of the propaganda rally Leni Riefenstahl filmed for Triumph of the Will (1934), the Albert Speer-designed Zeppelintribüne has fallen into mossy disrepair; mould creeps up the walls and weeds sprout from the cracks between concrete blocks. Teller's pictures of these spores and spindly wildflowers have a disconcerting delicacy and an aura of melancholy that's new in his work. He's too savvy, too sardonic to fall for the romance of ruins, but the Nuremberg series is haunting and hopeful. Whether it represents the ascendance of his quieter gentler and more serious side remains to be seen.

But quiet reflection is not exactly Teller's forte. Rudeness is. The cover of the catalogue for Ich bin vierzig ('I am 40'), his 2004 exhibition at Vienna's Kunsthalle Wien, is a self-portrait of the bare-chested photographer passed out with his head in a platter of roast pig and sauerkraut, beer steins and glasses of Jagermeister all around. It's a satire of Germanic overindulgence and macho self-indulgence, but it also establishes a recurrent theme. Teller often appears nude and (apparently) inebriated in his work, most famously, perhaps, in a 2003 portrait shot at his father's grave. According to Ulrich Pohlmann's catalogue essay, Walter Teller who committed suicide in 1988, was a 'tyrannical' man who hated soccer a sport that is still one of his son's ruling passions. (In Jüergen's 2002 film, World Cup Final, Germany v Brazil, 0-2, the camera records nothing but his moment-by-moment reactions to the progress of a crucial game.) In the photograph, titled Father and Son, Juergen stands naked before Walter's gravestone, one foot on a soccer ball, slugging from a bottle of beer. There's something thrillingly primal in this nighttime encounter between son and father the living and the dead, and the camera's flash captüres it as if in a bolt of lightning. But there's something ambiguous too: is Teller insulting his dad or saluting him? Taking his revenge or paying homage?

At the Lehmann Maupin show, alongside photographs of the weeds at Nuremberg, there were pictures of Teller naked, hunkered down and shitting in the snow at Bubenreuth; naked and framing his penis with one of the violin bridges his father manufactured; and naked with an erection pointed proudly at his wife's bare, pregnant belly. (Although it provided only the merest balance, the show also included a photo from the Marc Jacobs campaign of McMenamy lifting her gown to reveal an immaculately trimmed pubic bush - an image that appeared only in European magazines.) Lucas Samaras, John Coplans and Gilbert & George have also gone full frontal, but Teller's penis is probably the most over-exposed member in contemporary photography, after Terry Richardson's, though Richardson's frat-boy aggressiveness (and far more pornographic results) make Teller look modest by comparison. Both photographers employ the cold, flash-frozen style made popular in the fashion pages by Guy Bourdin, and both can be especially unforgiving about a subject's flaws or more often, their fatuous attempt at perfection (see Teller's portraits of The Clients, women of a certain age who make up the inner circle of haute couture buyers). But Richardson's nudity often has a nasty, taunting edge while Teller's is more mischievous. Even naked, Richardson always seems fully armoured, but Teller is almost embarrassingly undefended.

Perhaps the best example of Teller's willingness to bare all for his art is the series published in book form as Louis XV, the offshoot of a Marc Jacobs campaigu featuring Charlotte Rampling. 'I have tried to narrow the gap between my commercial and private work,' he told Gerald Matt in an interview included in the Ich bin vierzig catalogue, and these pictures prove his point. In a luxurious Paris hotel suite that recalls Helmut Newton, Rampling (occasionally topless) and Teller (nearly always quite nude) disport themselves with self-conscious abandon, sprawling on the rug, cuddling in bed, clowning around the grand piano. Rampling doesn't always look amused by the proceedings, but Teller is having a ball. He puts on makeup, smears himself with caviar pisses into the potted orchid, flashes the camera with his asshole, and generally barges about like a dishevelled, besotted teddy bear. The spectacle is comically outrageous but it's also kind of endearing. No matter how foolish, needy and intemperate he appears. Teller lets it all hang out.

'The only person I can be as brutally honest as possible with is me,' Teller once remarked, and his recent self-portraits, no matter how ludicrous, are riskier and more exciting than much of his previous work. In retrospect, his best-known book projects - Go-Sees (1999), which compiled hundreds of snapshots of aspiring models, and Tracht (2001), a collection of spur-of-the-moment head shots of beauty pageant contestants - and the portraits of The Clients seem too facile. Once Teller enters the frame, however, things get interesting. Witness his 2005 collaboration with Cindy Sherman, another series that began as an ad campaign for Marc Jacobs, which has just been published in book form. Wearing wigs, glasses, false teeth, a fake moustache and other cheesy disguises, Teller joins Sherman in the studio for a bit of light comedy If the results are not as shrewd as most of Sherman's solo work, they're often wickedly witty and as irresistibly vulgar as a Benny Hill skit. When Teller grinning like a madman in outsized sunglasses and a Rod Stewart wig, grabs Sherman's breasts from behind, he's doing what he does best: entertaining and provoking us. By any means necessary.

Do You Know What I Mean is on show at the Fondation Cartier pour l'art contemporain, Paris, from 4 March to 21 May. Ohne Titel, Teller's recent collaboration with Cindy Sherman and Marc Jacobs, is published by Steidl.