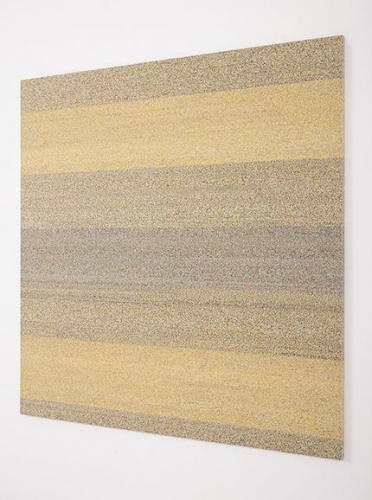 American artist Liza Lou, born in 1969, divides her time between Los Angeles and KwaZulu-Natal in South Africa. She is currently in Hong Kong promoting her first solo exhibition, ingxube, a series of six new works at Lehmann Maupin (until March 17). Lou’s relationship with South Africa - she established a studio of Zulu artisans in 2005 - has enabled her to develop her signature medium of glass beads by collectively producing intricate beaded canvases, sculptures and large-scale installations. Her work has shown in the world’s most prestigious galleries. The works at Lehmann are entirely comprised of wooden beads, which from distance, look more like paintings. #legend met Lou and shared a lively, informative chat.

You’re from LA, you live and work in South Africa with a team of 20 to 30 Zulu women, and you commission the beads and colours of the beads you work with, from Japan. How cosmopolitan.

[Laughter] Yes. The colours are commissioned in Japan, each is made with a particular quality, colour and shape. If I made these works alone it would take me about 10 years per picture. I work with 30 women in South Africa and this project is called ingxube, which means ‘mixture’ in Zulu. So I get the colour in these packets from Japan, I look at them as a painter and decide which palette I'm making, so I then take a giant cauldron - I'm like a witch - and mix and then I commission these long strips working with the women.

Do the women do what they want with the beads for these works or are you a kind of control freak?

It's kind of tweaky control, with the colour, palette, shape, but I work with all of these people; do they do what they want? Not really, no. I'm playing with the idea of randomness and control. The work stresses the process of making, it’s something very tightly controlled. I'm really trying to make a work about labour, or about celebrating this idea of labour, the kind of epiphany, or moment that you can have where labour takes over into something more than what it could be, like a sort of overwhelm, where it becomes more than labour for its own sake.

That’s a slow reaction to an increasingly fast world?

I love this thing when people look at art — and the attention span these days is about half-a-second — and you allow whatever you're looking at to pass your retinal field. This work demands this sense that you slow down. And if you don’t know that it's made of beads, it tricks the eye, you think the work is out of focus somehow. It's because the eye can't really recognise this type of labour. Your eye can't take it in or remember, as you get way closer, it gets easier.

I'm really so very interested in the anonymity of labour. If you were to turn around and try to remember what you just saw, you could not. There is no fixed image. I suppose that's what the work is really about. At least I hope It slows people down a nanosecond, for long enough for something different to happen.

You just called yourself a painter yet everyone calls you a sculptor. Which are you?

When you think about what a drawing is, or a painting, you’re really talking about colour. The patterns with this paint I use can’t be mixed with water or blended, so, technically these are sculptures, technically they are dimensional sculptures, they are almost like facsimiles of painting. But then, technically, it’s not a weaving either. When people say bead work, it’s not conventional bead work. And what is bead work anyway? [Laughter] You know, you put it on your wedding gowns.

I think journalists continue to call you a bead artist because it makes for snappy headlines in the New York Times like: The Venerable Bead.

[Laughter]. Oh gosh yes! Or like: The Bead Goes On.

\What headline could you give this article?

I like that. As you just used the word ‘painting’ two minutes ago that seems increasingly likely. Talking of titles, how do you title the works in this exhibit?

They are all based on townships where they were made, so we can reference the way they evolved and working in South Africa. Something about that place embodies this particular work.

It’s one hundred years since Duchamp’s urinal, or Fountain, as it was called which was sort of like the beginning of everything in 20th-century art. How do you assess his Fountain?

The thing about Duchamp is always his sense of humour. He’s a very serious person but with a wicked sense of humour. And the key to appreciating him is his love of chess. He spent the last part of life mostly thinking about chess, and therefore, he was always thinking about strategy and that kind of strategic mind in looking at art. He made everything possible. His great quote is: “Have fun, otherwise you’ll bore us,” and do what you love, find what you love, the idea. A lot of people use the catchphrase, the urinal as a cliché to say: ‘if the artist says it’s art then it’s art,’ but that’s cliché, and people can then say every bit of crap can be art, but I think that’s too bad. I feel as though for me, the entrance to his work, or my love for his work, is where I feel like I’ve got permission from his work to explore something, with intensity. He gives me the courage to work in a material that is looked down upon. In my case, I feel as though I’ve done something really terrible in working with beads, a material that’s degrading somehow, it’s not serious. At least the urinal is… earthy [laughter].

I was going to use the same word…

But, if it was glitzy, it probably wouldn’t work. In a way, I’m almost playing with that conflict sometimes in my work, but that’s another matter.

I love that idea. That’s the essence of humanity. Everything breaks down into these cells. I think of this kind of material as a first art form, the first known beads, something small you could fix to your body, people putting meaning to objects, I like that beads do a kind of DNA sequencing naturally and with all that repetition. This does that by virtue of how weaving takes place.

I love how every bead in your work is like an explosive narrative firework. They are the most multi-chaptered pictures I’ve ever seen.

Thank you. I love that idea. They are made with incredible care in Japan by a group of people so the making of each bead has an individual story. In the end, the picture has to work. I want it to be a slowing down, a phenomenological experience. What happens to your eyes the longer you stare at them.

Yes. I love to write.

Do you have a book you read and re-read?

I'm a pretty big Nabokov fan. You really have to love something to read and re-read it. One Hundred Years of Solitude [Gabriel García Márquez] is a book like that.

My mother feels the same way!

Do you have that reaction, too?

Not in the same way. Not with that passion. That would come with Nabokov, but not Márquez.

I like to get lost in that book. But then, Nabokov’s memoir is really incredible. He’s really interested in the notion of beauty. Let’s say, the person who wrote Lolita is not the person who wrote his memoir. It’s two different people – one has this incredible humour, Lolita is funny as well as tragic, but the memoir is all about family and duty and very much like Proust. Yes. Very, very Proustian. You should read it.

I will. Who wrote the best piece ever about you?

I read this about you the other day and thought it was sublime. Someone had written, the New York Times, I think, your work was about “glorifying the humble, beautifying the awful.” That’s wonderful, isn’t it? Maybe Peter Schjeldahl from The New Yorker, sorry I never know how to pronounce his name.

It’s funny. I met the American artist David Salle who showed here at Lehmann, also a great writer, especially about art, and he told me that Peter Schjeldahl and he learned everything they know about writing by copying a former American sports writer called Red Smith! I haven’t yet read, Red Smith.

I love that David Salle just comes right out and says that. What’s his name, Red West? I’ll have to check him out.

It’s Red Smith. Was there an art exhibition you saw in recent times that made you stop, your eyes stand-out on stalks, or switch into italic. For me it was Malevich at the Tate.

Wow. Yes. For me, Agnes Martin at the Guggenheim in New York.

Woman in the Dunes. But I can’t remember the director’s name. [Hiroshi Teshigahara].

Me neither. Why hasn’t Vanity Fair ever written about you? And why hasn’t Annie Leibovitz gone to South Africa to photograph you and your Zulu retinue of beadsters? You’re the dream VF subject in every single way. You tick every box ten times over.

[Laughter]. No they never have. I don’t know.

Can I email Graydon Carter and ask why?

You mean my hero?

That’s tough. I don’t know off the top. Who’s yours?

#legend
Back To Top