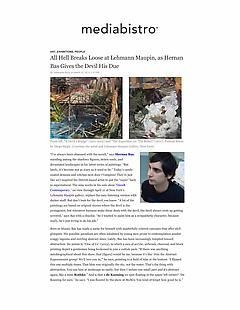 All Hell Breaks Loose at Lehmann Maupin, as Hernan Bas Gives the Devil His Due
By Stephanie Murg

“I’ve always been obsessed with the occult,” says Hernan Bas, standing among the shadowy figures, stolen souls, and devastated landscapes in his latest series of paintings. “But lately, it’s become not as scary as it used to be.” Today’s candy-coated demons and witches next door (Vampires! They’re just like us!) inspired the Detroit-based artist to put the “super” back in supernatural. The nine works in his solo show “Occult Contemporary,” on view through April 21 at New York’s Lehmann Maupin gallery, replace the easy-listening version with darker stuff. But don’t look for the devil you know. “A lot of the paintings are based on original stories where the devil is the protagonist, but whenever humans make these deals with the devil, the devil always ends up getting screwed,” says Bas with a chuckle. “So I wanted to paint him as a sympathetic character, because really, he’s just trying to do his job.”

Born in Miami, Bas has made a name for himself with masterfully colored canvases that offer idyll glimpses. His possible paradises are often inhabited by young men prone to contemplation amdist craggy lagoons and swirling abstract skies. Lately, Bas has been increasingly tempted toward abstraction. He points to “One of Us” (2012), in which a mix of acrylic, airbrush, charcoal, and block printing depict a gentleman being beckoned to join a cultish pack. “If there was anything autobiographical about this show, that [figure] would be me, because it’s like ‘Join the Abstract Expressionist group! We’ll lure you in,’” he says, pointing to a field of blue at the bottom. “I flipped this one multiple times. That blue was originally the sky, not the water. That’s the thing with abstraction. You can hint at landscape so easily, but then I isolate one small part and it’s abstract again, like a mini-Rothko.”

And is that a de Kooning we spot floating in the upper left corner?

“De Kooning for sure,” he says. “I was floored by the show at MoMA. You kind of forget how good he is.” Read on for more from Bas, who talked with us about painting, the devil, and Detroit.

The natural world—forests, trees, bodies of water, mountains—usually figures prominently in your work, but in Occult Contemporary, the built environment and architectural elements loom large. What’s the story there??

I’ve been having leanings toward abstraction lately. When I take a step back from that, adding the architecture to it and making things that are more angular and grounding are a way to take it back a little bit from abstraction. It allows me to make it more readable as a location or a scene that could actually be happening, not just in your mind.

How do you begin one of these paintings??

I usually start with a general abstract composition. I just start throwing paint on it. They all usually look like 1950s New York School paintings when I first start them. I compare it to the whole idea of staring into clouds, when you start to see shapes, like “Oh, that could be a cliff.” That’s why I tend to lean toward landscape, because whenever I do an interior scene, I have to plan it a little more significantly ahead of time. So it’s a little bit of laziness, but also it’s just more fun.?

These new canvases are big—as large as eight feet by nine feet. What led you to expand the scale of your work??

I’ve been working bigger and bigger for the last three or four years. These are probably the biggest I’ve done, other than diptychs. It’s actually harder for me to make a little painting now, because the scale of the figures have all stayed the same, but the area and the environment around them has exploded, and it’s harder for me to make an environment around a figure in a small painting now, because I just literally run out of room. There’s moments where I’ll start one of these big paintings, and I’ll run out of room for some kind of action happening, so I’ll just make accidental diptychs. I’ll have to add to another painting, to keep it going.

I also keep thinking about European tapestries and scrolls, storytelling like that. I think that’s something I’m probably going to start leaning more into, doing these long, scroll-like scenes that kind of excite me. And then multiple stories could be laid out on one canvas and read like a story, left to right.

Has your move from Miami to Detroit, where you’ve lived and worked for a couple of years now, affected your working style, your outlook??

It’s the first time I’ve had a studio by myself, which is both good and bad. It’s quieter but it’s also harder, because you get used to having something there to give a second opinion: Is this cheesy? Is this dumb? So that’s kind of difficult, but the space in Detroit! I bought my building [a former spice factory located in the city's Eastern Market historic commercial district] for what I paid in rent for a year in Miami.

Speaking of Detroit and the devil, was the city’s infamous “Devils’ Night” something that you thought about while at work on these new paintings??

Wow. I never really thought about that actually. But the remnants of that play into it, because if you look at the structures, all the burnt, collapsing stuff.

And is that a reference to the landscape of Detroit??