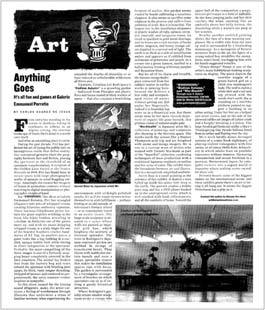 “Nin-Stealth” is Japanese artist Mr.’s collection of paintings and sculptures also showing at the Perrotin space. The works leech the senses like a Hunter Thompson acid trip and are freighted with anime and manga imagery. Mr. is one in a current wave of artists who teamed with Takashi Murakami as part of the “Superflat” collective, combining techniques of mass production with a traditional Japanese emphasis on outline and flat areas of color. The exhibit blurs the boundaries between art and illustration in a deceptively simplified aesthetic.

Secret Base is a small painting at the entrance of this exhibit. It depicts a man balled up inside his spider hole deep in the earth. The pervert cradles a kiddie porn mag and has a DVD player hooked up in the underground cavity, which is well stocked with food, refreshments, and all the comforts of home. Toward the upper half of the composition a prepu-beacent girl romps in a field of daffodils. As she does jumping jacks and her skirt catches the wind, opening like an umbrella above her belly button, the douchebag steals a worm’s-eye peep at her scanties.

Nearby, another untitled painting shows the face of a man wearing sun-glasses. He is visible only from the nose up and is surrounded by a foreboding moonscape. As a menagerie of bizarre monsters floats in the sir, the figure of a young naked boy straddles the anony-mous man’s head, tea-bagging him with his barely suggested testicles.

“Penyo-Henyo” Pyopo is one of the artist’s many bobblehead-looking sculp-tures on display. The piece depicts the oversize noggin of a green-haired girl on a child-size mannequin’s body. The waif is clad in a white skirt and a red tank top printed with the words that’s earth. She is standing on a stairlike platform painted to sug-gest a building in an urban setting. Under her feet are a helipad and street scenes, and on the side of the plywood edifice are images of a plane crash and a burglar breaking a window. The large-headed girl looks not unlike a Macy’s Thanksgiving Day Parade balloon freed from its tether and floating over the city.

Mr.’s work luridly mines deranged notions of a comic-book nightmare, of playing violent videogames with live ammo, or of cutesy Hello Kitty debauch-ery in which adults feast on youthful innocence without remorse. Skewering consumerism and sexual fetishism in a postwar, Westernized Japan, he cata-pults viewers into a sugary world of depravity where nothing seems sacred, let alone safe.

Perrotin boasts some of the biggest names on the international scene, and these exhibits prove there’s an art to let-ting it all hang out. It seems the dapper Frenchman has a grip on it.