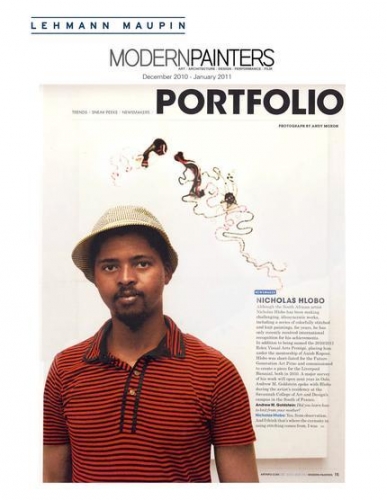 Although the South African artist Nicholas Hlobo has been making challenging, idiosyncratic works, including a series of colorfully stitched and knit paintings, for years, he has only recently received international recognition for his achievements. In addition to being named the 2010/2011 Rolex Visual Arts Protégé, placing him under the mentorship of Anish Kapoor, Hlobo was short-listed for the Future Generation Art Prize and commissioned to create a piece for the Liverpool Biennial, both in 2010. A major survey of his work will open next year in Oslo. Andrew M. Goldstein spoke with Hlobo during the artist’s residency at the Savannah College of Art and Design’s campus in the South of France.

Andrew Goldstein: Did you learn how to knit from your month?

Nicholas Hlobo: Yes, from observation. And I think that’s where the curiosity in using stitching comes from. I was raised by women, and really I think Iv’e spent most of my time around women.

AG: You say that being gay is very important to your practice, to your art. What what it like growing up gay in South Africa.

NH: We have a quite advanced and very open constitution—it’s quite beyond others. Gay marriage is legal, for example. At home, surprisingly I was very welcomed after coming out to my father. His question was, “So, do you meant to tell me that you will be cuddling with a boy?” That really startled me, because it’s more like I was hoping he would become very angry, but he didn’t.

AG: Although stitching is vital in what you do, it has a feminine connotation. But it’s masculine at the same time, as in scars and baseball seams.

NH: Look around: Who are the best dressmakers? The men. It’s regarded as a woman’s chore, but really men are taking charge of it. Without really getting the credit—or maybe those men are not man enough!

My works play on gender as well on place of origin. I’m an artist from South Africa. I remember we had a show in Salzburg, at Hangar-7. This gentleman said he found certain traditional painting not to be very “African,” because they embody a lot of western standards, whereas he felt that my work was very African because it’s crafty. And I found that very interesting, because it’s true and not true. I majored in painting, but I chose not to paint. I “paint’ with materials instead. If you look at Anish Kapoor, the works have an element of not being touched by human hands. I enjoy works the look like that, like they came of a machine. But I enjoy touching things. I really enjoy fiddling with the material. I get to hold it myself and feed the soul into it.

AG: Are you excited to work with Kapoor? You each have your own very distinctive practice.

NH: I think it’s going to be great. I think he is an amazing soul, after meeting him and seeing his face. We’re almost in the same orbit somehow. He might be at a greater distance than me, but I’m catching up.

AG: A lot has happened in your career over the past year.

NH: People feel that it’s quite a leap. They never except, four years after graduating, that you may be taking part in international shows. They expect it to take 30 years, or until you die. But I think it’s because I have always had this thing in my head that I should never cut myself short, and I should not be too anxious. I have an understanding of what I want. Either I get accepted, or I get rejected.

AG: Tell me about your intention to elevate the Xhosa language by using it in the titles of your works.

NH: The world is very anglicized. My language is about to become something that is half English, half African. It’s called evolution. And it’s a process that has to happen for all cultures to grown. Because if the Xhosa people resist that happening, then the language will die, just as Latin did. It’s true that I use the Xhosa language in my works to try to preserve it. I think in South Africa and many places there are new languages that are born. That has to happen—the growing, the becoming something else. And maybe in the next 100 years we’ll get to give them a name, these funny language that mingle different cultural influences.

AG: How does your performance work relate to your overall practice?

NH: I still view that as a sculpture: It’s putting the real soul into the sculpture. I get to put on those costumes, assume that character, and I forget about myself. I become that creature. It’s about that sculpture taking a real life form. And I really get to exercise my ambitions of becoming an actor. I desire to be an actor, a musician, an architect. If I could, I would build my house, many my own play, cook my own food, that sort of thing.

AG: You worked in movies for a while. Are you ever going to make a film?

NH: That’s one thing I would love to do.