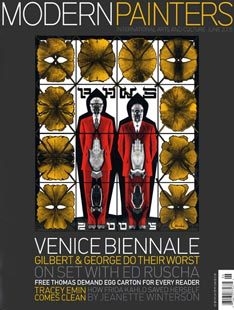 WE WILL DO OUR WORST:
Gilbert & George Take on the Venice Biennale
Interview by Martin Gayford

MG SO, YOU'VE MADE IT TO VENICE AT LAST! About ten years ago we were talking about how much you would like to do it. When it was announced last year you would be the British representative, you said "We will do our worst."

GEORGE That's right. Delighted to accept. We will do our worst.

MG And your worst has turned out to involve the leaves of the Ginkgo biloba tree.

GILBERT Entirely by accident. We had a big show in New York, probably the most successful show we have ever done, with 36 enormous pictures. We were going back to our hotel after the private view and we saw these strange leaves on the pavement near the Gramercy Park Hotel. At first we thought it was dog shit, but it wasn't. The female ginkgo leaf simply smells like that.

GEORGE It has a very unpleasant smell. Nurseries have to let them grow to a certain age before they sell them. We took the leaves back to London, but it wasn't until we were designing the pictures that we discovered that everybody knows about the ginkgo tree.

GILBERT We even went to Kew Gardens to buy books about the ginkgo. Then we discovered this Viennese doctor in St Etienne who cures people with ginkgo therapy.

GEORGE He prescribes ginkgo. We asked him what illness he most commonly uses it to treat. He answered that it was cases of celibate priests who have sexual dreams and are tortured by the conflict with their profession.

GILBERT It is the leaf of the memory tree; that's what it's called in China. It opens your arteries and allows the blood to stream through your brain.

GEORGE Mao was against the ginkgo because it was revered in a semi-religious way.

MG So suddenly you became ginkgo-conscious?

GEORGE Yes. But fortunately not until after we'd designed the pictures.

MG So, at first you were just drawn to the leaves by intuition alone?

GEORGE Yes, unthinking. In the same way as we took images of graffiti tags for years.

GILBERT But we distorted the leaves. We cut and mirrored them in many different ways. We didn't like them as they were.

MG In a lot of your new work you yourselves are mirrored.

GEORGE It's all thanks to the pubic lice. We mirrored the insects to tidy them up and make them regal. The crab is discriminated against by everyone. We love it because we think it is the most democratic creature. It doesn't respect age or race or sex or social position. So we tried to make it more respectable. Then we realized we could mirror ourselves and tags and many things.

GILBERT That was the beginning. It looks nearly normal, but it is not. And that creates this amazing, strange atmosphere. It's still us but you can produce this inner feeling or inner fear much better than an ordinary photograph. It makes it almost surrealistic, don't you think?

MG Yes, it makes Gilbert look like a completely different person, but on the other hand George looks much the same.

GEORGE It depends how asymmetrical the person is.

MG They're a little bit like cartoons and also a little like those perspective tricks that Renaissance artists such as Holbein liked.

GEORGE Sure, or cylinder pictures. You can also get the same effect if you look in the curved windows on the top of a double-decker bus.

GILBERT In fact it's all done because we are using new technology; we're working with computers. Last year was an extraordinary year. We made 100 pictures, almost all of which were sold. We had to train ourselves to use new technology.

GILBERT Now we have an index of images. Do you see all those lists on the wall? That's the index. Do you see the categories: leaves, flowers, crab lice, street signs?

GEORGE They are all scanned into our computer at low resolution.

GILBERT Otherwise we couldn't find them. Searching through 100,000 images would be a nightmare. But this is like a brain, you are able to think much faster and change the image in front of you. That's an extraordinary freedom, when you hear about artists who have 30 assistants. You hear about artists with all these people copying photographs. What a ridiculous idea. Copying colour photographs? I don't get it.

MG Those things that look like turbines through there are part of the computer are they?

GEORGE Yes, those are the printers.

GEORGE But we still use conventional negatives, by the way. You still get better quality that way, we checked it.

GILBERT Once you have a pixel you can manipulate it as you wish. That's what all art is: manipulation. We have a special computer with amazing power, because we use three gigabytes of memory. That's enormous.

GEORGE But it's still not enough. They're building a new one at the moment.

MG It's an interesting fact that there is so much more information in a picture than in a text. Are you on email? Do you use the internet?

GILBERT Nah. We haven't even answered a letter for the last five months. We don't need anything like that because there are only three or four people in the world who are important to us. And we telephone them when it's important. We don't have anything to say except with our pictures.

MG The Internet is an extraordinary medium which is changing the way that people think.

GEORGE But we don't want to think. It's exhausting enough without that. We didn't think when we did the Ginkgo Pictures, at all. Afterwards we found out all this stuff about them.

MG Afterwards you found out why you made them?

GEORGE Exactly that. Why we were made to make them. When we finished them we thought, "What on earth were we doing making 25 pictures about fallen leaves from Gramercy Park?"

GILBERT In fact, we don't want to know what we are doing. It's much better not to know. You have to express yourselves, once you've finished a group of works you have to start all over again. It's extraordinary stuff - what an artist has to do. You finish a big group of works, then the next day you have to begin again. Forty years we've been doing that.

MG I think doing anything out of the ordinary way of life is very hard.

GEORGE A clergymen once said to us, \'Jealousy is a bad thing. But I must confess that I am sometimes jealous of the artist because the artist is closer to creation.'

MG You accepted this tribute despite your opposition to religion?

GILBERT From that vicar, yes.

MG What are your feelings about going to Venice?

GEORGE Venice is not our favourite city, It's too loved by the middle classes. They adore it; they can't wait to put on a mask and walk through the Venetian streets.

MG It's not a working - class place; it's very safe and bourgeois.

GILBERT It's dead in fact - because all the Americans and Japanese are buying it up and ordinary Italians scarcely live there. We've hardly ever been there. It's completely claustrophobic. Last year we went there to see the British Pavilion.

GILBERT I went there when I was a student of 15. It's only one-and-a-half hours from my native village by car. And we went to the Biennale once, and after the first five minutes you see the same people again and again and again. But for us the Biennale is exciting just because we will show a new group of works in this international setting.

MG So you're looking forward to it.

MG Gilbert, you come from a little village in the Dolomites, and you have an Italian passport - although your native language is not Italian but Ladino. Are you seen as an Italian artist in Italy?

GILBERT Not at all. It just doesn't matter. We're just Gilbert & George and that's it.

MG As well as the Biennale you also have a big Tate show coming up in February 2007. How are you reacting to all this recognition?

GILBERT It's not recognition, it's grudging acceptance. It's been more a matter of beating them down. They felt obliged. At the moment you cannot see one G&G picture in London.

GEORGE I don't believe that the Biennale means recognition, not for one second. I don't even think the fact they are doing the exhibition at the Tate means that they accept us.

MG What would you say if you were offered a knighthood?

GILBERT It would be quite amusing because it would annoy so many people.

GEORGE Is there any precedent for a double knighthood? I don't think so.

MG Not of two people who are one artist, no. So the answer would be yes?

GILBERT I didn't say that. I'm not even English.

MG And you're great supporters of the royal family?

GILBERT We love Prince Charles, we always did. He's very intelligent, he got nearly everything right.

GEORGE He's loved all over the world. His new wife is a lovely lady. We wouldn't like to be like weird artists, against the royal family.

MG Talking of getting things right, you have been right in quite a few of your wild guesses.

MG When you first moved into Spitalfields, it was a slum about to fall down. Now it's a heritage zone with a National Trust house.

GILBERT It's the centre of London here.

MG And you always said that London was the most global place in the world.

GEORGE Coming back from dinner on the bus every single person is from a different part of the world. Extraordinary.

MG And now people say London's the centre of the artworld.

GEORGE You don't have that in New York. If you have a small review the size of a packet of cigarettes you are congratulated. Here we always used to say that everybody on the street knows the name of a living sportsperson, a living murderer and a living politician, but not a living artist. Now it has changed. Now they all know the names of half a dozen living artists and that is an improvement.

GILBERT But we have boxes and boxes of cuttings, and in the end it means nothing. We have hardly sold a picture in this country in the last ten years. There is too much blabbing. You can blab day and night, but if you don't buy anything it means nothing.

MG I'm glad you've preserved your sense of grievance. I feel it's important to you. You're not mellowing.

GILBERT Why should that change? More and more we feel like William Blake who did his own stuff and that was it. He didn't care about anyone else. There's only one way to do it: concentrate on your thinking, your beliefs, and your own art.

New work by Gilbert & George can be seen in the British Pavilion in the Giardini della Biennale as part of the 2005 Venice Biennale, from 12 June to 6 November