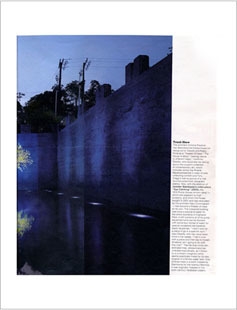 Trunk Show
The architect Antoine Predock has described the Dallas house he designed for Deedie and Rusty Rose as a "theater of trees." The house is about "viewing nature in different ways." confirms Deedie, who could also be talking about the couple's collection of contemporary art. which includes works like Rivane Neuenschwander's video of ants collecting confetti and Tony Cragg's wall sculpture of a tree reconstructed from discarded planks. Now, with the addition of Jennifer Steinkamp's video piece "Eye Catching" (2003), the 1915 Pump House (shown here) which sits adjacent to their property, and which the Roses bought in 2001 and had renovated by the architect Gary Cunningham - has become a theater of trees all its own. The industrial building was once a source of water for the entire township of Highland Park; it still contains all of its pump equipment and can be flooded with some four inches of water for special occasions like barefoot black-tie parties. "I don't look for a piece to go in a specific spot," says Deedie. who has never been timid in her tastes. "I fall in love with a piece and then say to myself, Whatever am I going to do with this one?" The life-size computer-animated tree, whose branches undulate hypnotically, as if blown by a constant imaginary wind. seems practically made for its new location in a former water tank. One of three trees in a work created by Steinkamp for the Istanbul Biennial, it was originally installed in the sixth-century Yerebatan cistern.