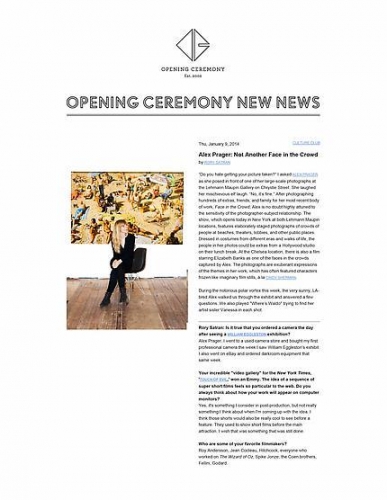 Alex Prager: Not Another Face in the Crowd
By: Rory Satran


“Do you hate getting your picture taken?” I asked as she posed in front of one of her large-scale photographs at the Lehmann Maupin Gallery on Chrystie Street. She laughed her mischievous elf laugh. “No, it’s fine.” After photographing hundreds of extras, friends, and family for her most recent body of work, Face in the Crowd, Alex is no doubt highly attuned to the sensitivity of the photographer-subject relationship. The show, which opens today in New York at both Lehmann Maupin locations, features elaborately staged photographs of crowds of people at beaches, theaters, lobbies, and other public places. Dressed in costumes from different eras and walks of life, the people in her photos could be extras from a Hollywood studio on their lunch break. At the Chelsea location, there is also a film starring Elizabeth Banks as one of the faces in the crowds captured by Alex. The photographs are exuberant expressions of the themes in her work, which has often featured characters frozen like imaginary film stills, à la Cindy Sherman.


During the notorious polar vortex this week, the very sunny, LA-bred Alex walked us through the exhibit and answered a few questions. We also played "Where’s Waldo" trying to find her artist sister Vanessa in each shot.


Rory Satran: Is it true that you ordered a camera the day after seeing a William Eggleston exhibition?


Alex Prager: I went to a used camera store and bought my first professional camera the week I saw William Eggleston's exhibit. I also went on eBay and ordered darkroom equipment that same week.


Your incredible "video gallery" for the New York Times, 'Touch of Evil,' won an Emmy. The idea of a sequence of super short films feels so particular to the web. Do you always think about how your work will appear on computer monitors?


Yes, it's something I consider in post-production, but not really something I think about when I'm coming up with the idea. I think those shorts would also be really cool to see before a feature. They used to show short films before the main attraction. I wish that was something that was still done.


Who are some of your favorite filmmakers?


Roy Andersson, Jean Cocteau, Hitchcock, everyone who worked on The Wizard of Oz, Spike Jonze, the Coen brothers, Fellini, Godard.


Let’s talk about Face in the Crowd, which was shot on a soundstage in Los Angeles with hundreds of extras. How did the casting process work?


My studio would contact different casting agencies and send me hundreds of photos of extras to look through and I'd choose the ones I wanted to use. I also am always looking out for people on the streets when I'm out, as well as using friends and family. My sister, Vanessa Prager, who is also an artist, is in every single crowd photo I made. She's like the "Where's Waldo" in the pictures.


How did you develop the costumes?


I've been working with the same costume designer since I started these crowd pictures. Her name is Callan Stokes and she's an old friend of my sister. I'll send her references of what I want and then we'll go to the costume houses and put together different costumes. She's a machine on set!


Are there any iconic historic photographs of crowds that have stuck with you?


Weegee's Coney Island [photos]. And there are some crowds in Roy Andersson's Songs from the Second Floor that are amazing.


Do you collect photography?


Do you use Instagram? How do you feel about the current wave of documenting everything, all the time?


Yes, I love Instagram. I think we have to be careful about not being in the moment and experiencing life as it's happening. Sometimes I look around when I'm in a beautiful place and notice that everyone around me is taking selfies, rather than feeling the moment. I love Instagram because it's fun and it's a good way to keep in touch, I just think we need to keep a balance.