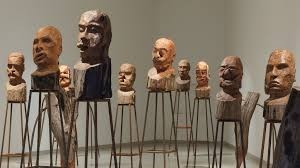 You hear the sound before you see it: an excerpt from J’accuse!, a powerful antiwar film made in 1919 by the French director Abel Gance, in which he persuaded scarred first world war veterans to play the war dead summoned up by the film’s protagonist as a lesson to the living. But before you see the extract, you confront its “audience”: 18 towering wooden busts, their rough-hewn faces distorted and scarred in an echo of the gueules cassées (broken faces) on the screen before them.

Named after Gance’s film, this striking installation is the centrepiece of an exhibition by the French-Algerian artist Kader Attia at Frankfurt’s Museum für Moderne Kunst (MMK).

Attia’s busts first appeared at Documenta 13 in 2012, as part of “The Repair from Occident to Extra-Occidental Cultures”, a large-scale, cabinet-of-curiosities installation that delved into colonial history, exploring the psychology of coloniser and colonised and the roots of attitudes to immigrants in Europe today. As its name suggests, the work investigates the notion of repair — a theme that has absorbed the artist for 20 years, and which he has evolved for the show at MMK.

“I was fascinated by how in traditional societies, not only Africa, but also Japan and the west before modernity, when a broken object was repaired, the repair process always kept the trace of the injury,” he explains when we meet in a cluttered, book-filled corner of his studio in Berlin, the city he has lived in since 2010. But while traditional societies repair objects to give them a new life, often incorporating elements of European culture in the process — he shows me a Berber necklace dotted with French francs — the western approach is to discard objects that are damaged, valuing only originals in pristine condition. For Attia, repair has become a metaphor for cultural reappropriation, and resistance.

During the Algerian war his grandmother worked for the independence movement by collecting silver jewellery in her mountain community and storing it in a cave; soldiers with donkeys would later take it to Tunisia to be melted down and sold to buy Kalashnikovs. “The repair is not only a fixing,” Attia says. “It is a translation, an act of re-appropriating the freedom from which you have been removed.”

Documenta gave Attia international recognition and opened doors for him across the art world. As one of four artists shortlisted this year for the Prix Marcel Duchamp, he will be part of a group show at the Centre Pompidou. Currently he has work in an exhibition co-curated by the former French president Jacques Chirac at the Musée du Quai Branly, in Paris, while his re-creations of the 2009 piece, “Untitled (Ghardaïa)”, a scale model of an ancient Algerian town at Tate Modern and the New York Guggenheim have garnered column inches, not least because they are made entirely from couscous.

Growing up in Algeria and the suburbs of Paris, Attia (now 45) developed a love of books. Later Franz Fanon’s The Wretched of the Earth proved an inspiration, as did the work of the Brazilian poet Oswald de Andrade. But it was during a spell in the Republic of Congo in the mid-1990s that he became fascinated by the way people repaired objects; after that, poking about in the storerooms of ethnological museums in the US, France and Belgium, he took the idea further.

Artists, he says, have a responsibility to supplement a failing education system by holding up for scrutiny moments that would otherwise get lost. “I think it is important to investigate these events through the eye and the light of art, because the neutrality of art can help us at least to ponder the questions.”

In 2014, a media image of looted vitrines at the Egyptian Museum in Cairo inspired the heart-stopping performance “Arab Spring”, which Attia restaged at Art Basel last year. The terrible sound of breaking glass fills the air as the artist, his face shaded by a hoodie, pelts rocks at the cases. The work enabled Attia to explore why people intent on reclaiming their future would destroy what was in the process of becoming theirs. “It’s something I don’t get. I’m still working on it,” he shrugs.

And the white heat of performance gave him an unexpected insight into revolt: “Even surrounded by the crowd, I became very angry,” he says. “I found there is something out of control [about] revolution.”

Another such moment, albeit a less intense one, occurs at MMK where Attia forces us to enter the show through a caged-in alley, the wire netting overhead strewn with household junk discarded by Jewish settlers in the buildings above. The piece was inspired by Hebron’s Shuhada Street — a place which, we learn from cuttings, has been closed to Palestinians since the riots following the massacre of 29 Muslim worshippers at the Cave of the Patriarchs by an Israeli extremist in 1994. Hebron had re-erupted as the “capital of intifada” (or uprising) last autumn, when Attia was putting the show together.

“There are endless ways of being a political artist, but I am completely comfortable with the idea,” he says. “I go back and forth between a highly political grammar and syntax and work that is much more poetical. But even with the poetical, there is something there: it’s a matter of degree.”

Attia is thrilled that academics seem eager to engage with his ideas. He sees the workshops he’s invited to as part of his art and believes that the non-western approach to repair — making plain the injury — may hold a clue to how we might learn to express repressed ideas and to live together more successfully. “Reason’s Oxymorons” (2015), an 18-channel video in which he discusses colonialism, mental illness and genocide with psychiatrists, historians, traditional healers and others, most of them African, set the ball rolling.

Later this year, he has a residency at Chicago’s Northwestern University, to pursue such topics. “I do not know what will come out of this, but I know something will come,” he says with a grin. An exhibition at the university’s Block Museum of Art, opening in January, will enable us to see the results.

Financial Times
Back To Top