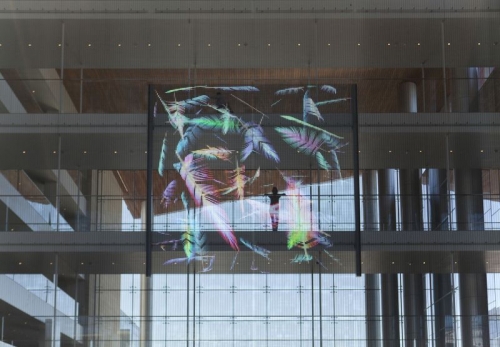 They couldn’t be more different.

“Murmuration,” by Los Angeles artist Jennifer Steinkamp, is a huge, visually spectacular electronic light display that hangs high in the entrance hall of the new Gov. George Deukmejian Courthouse in Long Beach. Controlled by a computer program and using specially treated steel mesh material as a screen, it shows shifting, multicolored images of feathers meant to symbolize the dawn of justice in Western civilization.

The other winner left no permanent new artworks on the landscape, but was instead a social research project that delved into the poor south Los Angeles County community of Willowbrook to document the art and creativity flourishing there despite the odds.

Sponsored by the Los Angeles County Arts Commission, the main idea of “Project Willowbrook”  was to develop a creative profile of the community of 35,000 people that can now help guide subsequent efforts to meet Willowbrook’s cultural needs as the county invests hundreds of millions of dollars in the new Martin Luther King Jr. Community Hospital that's scheduled to open next year. About $1 million has been reserved for arts spending in the neighborhood, to be overseen by the Arts Commission.

The two projects were among 37 picked from 342 contenders across North America by a three-judge panel of two artists and a public art expert. The awards are sponsored by Americans for the Arts, a leading nonprofit group that lobbies for better government funding for the arts and assists the nonprofit arts sector nationwide.

Also among the winners was a colorful, igloo-like shelter at a streetcar stop in Portland, Ore., by Los Angeles artist Jorge Pardo.

There’s no cash prize, but photos and information about each winning project is logged into a database called the Public Art Network Year in Review.

Leticia Rhi Buckley, spokeswoman for the county Arts Commission, said it’s expecting to receive three honorary scrolls  – one to hang in its offices, and one each for LA Commons, a nonprofit organization that conducted the information-gathering for Project Willowbrwook, and Rosten Woo, a designer and educator who led the effort. About half the funding for the $211,000 project came from the National Endowment for the Arts, and the rest from county funds, including money provided by Los Angeles County Supervisor Mark Ridley-Thomas, whose district includes Willowbrook.

The idea of documenting a community’s creative assets as a form of public art in itself is “somewhat of a new way of working,” juror Cath Brunner, a Seattle Public Art expert, said in a transcript of the judges' comments about the winners.

“For decades, outsiders defined…Willowbrook for what it lacked....But Project Willowbrook’s ambitious and tenacious promotion of the creative energies of this neighborhood…gave [residents] a reason to come together and recognize the abundance in their community," Brunner said.

Another juror, Massachusetts sculptor Ralph Helmick, said that Project Willowbrook was praiseworthy as social work, but that he had some some misgivings about recognizing cultural planning and community building as art.  “Social practice art may have its place," he said, but "public art should provide some sort of profound aesthetic engagement. Some form of beauty.”

That’s exactly what the jurors found in Steinkamp’s “Murmuration,” which went on view when the $340-million Superior Court building in Long Beach opened in September, paid for by private developers and leased back to the state for $50 million a year under an unusual funding arrangement.

The installation, which cost $1.2 million to design, build, program and install, consists of computer-controlled LED lights embedded in a screen that’s about 26 feet wide and 24 feet tall, hung high in the five-story entrance way. "Murmuration" was one of only six award-winners unanimously favored by all three jurors.

“This is some impressive eye candy that goes far beyond eye candy,” said Helmick. “The piece is transporting. It’s evanescent. This is first-class high technology in the service of visual poetry.”

Steinkamp, a professor in UCLA’s Design Media Arts program, said in an interview that she heavily researched the history of justice and how the concept has been rendered in past courthouse art. She said she was going for an updated and more oblique approach to the stone friezes traditionally sculpted into courthouse facades, often with an allegorical robed woman holding the scales of justice.

Her historical inquiries led her to Ma’at, the ancient Egyptian goddess of truth and justice who was believed to have placed the heart of each newly dead person on one platter of a balance and an ostrich feather on the other. Only those whose hearts balanced perfectly with the feather – a sign of having lived justly – would earn eternal life.

“It’s tricky to come up with something for a courthouse because it’s such a serious environment, where one decision can change people’s entire life," Steinkamp said. The feather motif and the idea of sudden change suggested her title, “Murmuration,” a scientific term for how flocks of birds fly in swarms and suddenly change directions in perfect unison.

Steinkamp is well-represented with public art in L.A. Her most recent piece is “Garlands,” a bid to enliven a dark driveway underpass at Cedars-Sinai Medical Center by projecting a colorful floral effusion onto concrete walls on either side of Gracie Allen Drive.

Elsewhere, Staples Center lights up on event nights with “X-Ray Eyes,” (1999), a digital animation on a screen jutting from the side of the arena. “Hollywood and Vine” (2010) features eight 20-foot high columns along the Hollywood Walk of Fame on Vine Street north of Hollywood Boulevard. Each one sports a floral LED display that Steinkamp patterned after flowers seen in particular classic films – among them “Citizen Kane,” “My Fair Lady,” “Philadelphia Story” and “It’s a Wonderful Life.”

Other well-known artists among this year's award winners were James Turrell, for "The Color Inside," an installation for sky-viewing atop the roof of the Student Center at the University of Texas in Austin.