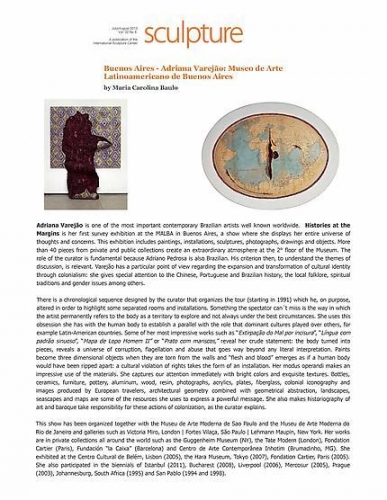 
Adriana Varejão is one of the most important contemporary Brazilian artists well known worldwide.  Histories at the Margins is her first survey exhibition at the MALBA in Buenos Aires, a show where she displays her entire universe of thoughts and concerns. This exhibition includes paintings, installations, sculptures, photographs, drawings and objects. More than 40 pieces from private and public collections create an extraordinary atmosphere at the 2° floor of the Museum. The role of the curator is fundamental because Adriano Pedrosa is also Brazilian. His criterion then, to understand the themes of discussion, is relevant. Varejão has a particular point of view regarding the expansion and transformation of cultural identity through colonialism: she gives special attention to the Chinese, Portuguese and Brazilian history, the local folklore, spiritual traditions and gender issues among others.


There is a chronological sequence designed by the curator that organizes the tour (starting in 1991) which he, on purpose, altered in order to highlight some separated rooms and installations. Something the spectator can´t miss is the way in which the artist permanently refers to the body as a territory to explore and not always under the best circumstances. She uses this obsession she has with the human body to establish a parallel with the role that dominant cultures played over others, for example Latin-American countries. Some of her most impressive works such as “Extirpação do Mal por incisura”, “Língua com padrão sinuoso”, “Mapa de Lopo Homem II” or “Prato com mariscos,” reveal her crude statement: the body turned into pieces, reveals a universe of corruption, flagellation and abuse that goes way beyond any literal interpretation. Paints become three dimensional objects when they are torn from the walls and “flesh and blood” emerges as if a human body would have been ripped apart: a cultural violation of rights takes the form of an installation. Her modus operandi makes an impressive use of the materials. She captures our attention immediately with bright colors and exquisite textures. Bottles, ceramics, furniture, pottery, aluminum, wood, resin, photographs, acrylics, plates, fiberglass, colonial iconography and images produced by European travelers, architectural geometry combined with geometrical abstraction, landscapes, seascapes and maps are some of the resources she uses to express a powerful message. She also makes historiography of art and baroque take responsibility for these actions of colonization, as the curator explains.


This show has been organized together with the Museu de Arte Moderna de Sao Paulo and the Museu de Arte Moderna do Rio de Janeiro and galleries such as Victoria Miro, London | Fortes Vilaça, São Paulo | Lehmann Maupin, New York. Her works are in private collections all around the world such as the Guggenheim Museum (NY), the Tate Modern (London), Fondation Cartier (Paris), Fundación “la Caixa” (Barcelona) and Centro de Arte Contemporânea Inhotim (Brumadinho, MG). She exhibited at the Centro Cultural de Belém, Lisbon (2005), the Hara Museum, Tokyo (2007), Fondation Cartier, Paris (2005). She also participated in the biennials of Istanbul (2011), Bucharest (2008), Liverpool (2006), Mercosur (2005), Prague (2003), Johannesburg, South Africa (1995) and San Pablo (1994 and 1998).