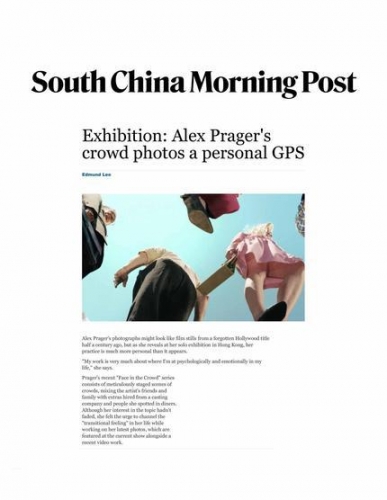 
Alex Prager's photographs might look like film stills from a forgotten Hollywood title half a century ago, but as she reveals at her solo exhibition in Hong Kong, her practice is much more personal than it appears.


"My work is very much about where I'm at psychologically and emotionally in my life," she says.


Prager's recent "Face in the Crowd" series consists of meticulously staged scenes of crowds, mixing the artist's friends and family with extras hired from a casting company and people she spotted in diners. Although her interest in the topic hadn't faded, she felt the urge to channel the "transitional feeling" in her life while working on her latest photos, which are featured at the current show alongside a recent video work.


"I have a lot of other projects happening right now. I just moved into a house that I'm renovating, and I have all these things going on with my family," says the 35-year-old artist.


"It felt like a very transitional time for me where things felt more like echoes of things past, with the feeling of anticipating things to come."


A Los Angeles native who decided to pursue photography after a visit to a William Eggleston exhibition, Prager began to learn her craft when "I had an overwhelming sense that I wanted to do it — now. I didn't see how the pictures in my head that I wanted to make were going to be made quickly enough if I went through school to learn everything, so I just taught myself one thing at a time."


The first photo she sold evokes the Wicked Witch in The Wizard of Oz, and was shot with a friend in a park near her house. Since then, Prager's portraits of women put in cinematic settings have drawn comparisons to the work of Cindy Sherman, although she confesses that whenever she's pressed for ideas, it's street photographers she turns to.


"It was that exact thing he captured that I was attracted to," she says of Eggleston, her primary influence. "It was like juxtaposing the mundane and something very magical and life-changing and feeling very alive. The pairing of those worlds was so interesting to me and so powerful.


"William Eggleston, Bruce Gilden, Weegee, Enrique Metinides and Martin Parr: these people are capturing real life, but they're also attracted to the characters in the real people," Prager says. "I'm very influenced by that kind of documentary photography."


In her previous works, the artist has referenced films such as The Wizard of Oz (1939), The Red Shoes (1948), as well as selected works by Alfred Hitchcock, Jean-Luc Godard and David Lynch. Swedish director Roy Andersson, who makes absurdist comedies on the human condition with largerly static tableaux, was a major inspiration for Face in the Crowd. "I don't try and hide my influences," says Prager, laughing.


Her connection with the film industry is growing deeper. Having picked up the movie camera since she was spurred on to show "the before and after" of her film still-like photos at a 2008 exhibition, she has also worked with a range of Hollywood actors, including Elizabeth Banks, Bryce Dallas Howard and, for an award-winning collaboration with The New York Times, Brad Pitt and George Clooney.


For now, Prager is cautiously optimistic about a future career in feature filmmaking. "I feel like it's best to just take things one day at a time," she says. "It'd interest me if the right project came along, or if I had some brilliant idea to turn into a two-hour film. Two hours is a long time. The longest film that I've done is 10 minutes."


But don't expect to spot Prager in her own photos. Unlike Sherman, she's never done that. "My sister is in almost all of them, and she and I look kind of similar, so I vicariously live in my photographs through her," she says of the painter Vanessa Prager, five years her junior.


"It's too much work. I'm there to make the picture and direct, and I can't take any time off to put the costume on and do the make-up and have somebody else behind the camera. It just doesn't feel right. I'm a control person."


She pauses for a second, and exclaims, "It's my set. I'm not going to let somebody else run it."