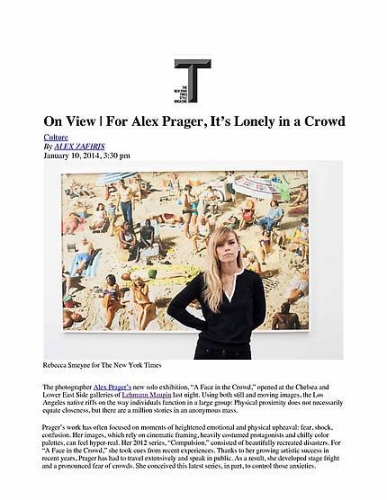 On View | For Alex Prager, It’s Lonely in a Crowd
By: Alex Zafiris


The photographer Alex Prager’s new solo exhibition, “A Face in the Crowd,” opened at the Chelsea and Lower East Side galleries of Lehmann Maupin last night. Using both still and moving images, the Los Angeles native riffs on the way individuals function in a large group: Physical proximity does not necessarily equate closeness, but there are a million stories in an anonymous mass.


Prager’s work has often focused on moments of heightened emotional and physical upheaval: fear, shock, confusion. Her images, which rely on cinematic framing, heavily costumed protagonists and chilly color palettes, can feel hyper-real. Her 2012 series, “Compulsion,” consisted of beautifully recreated disasters. For “A Face in the Crowd,” she took cues from recent experiences. Thanks to her growing artistic success in recent years, Prager has had to travel extensively and speak in public. As a result, she developed stage fright and a pronounced fear of crowds. She conceived this latest series, in part, to control those anxieties.


For the shoot, Prager personally selected and dressed friends, relatives and 150 extras, and used a Hollywood sound stage to represent places where people gather: city streets, a movie theater, a beach, an airport. “Crowds amplify whatever emotion you happen to be experiencing at the time,” she explains. “If you feel a little bit lonely, being around hundreds of people who aren’t really aware of what you’re feeling, or don’t really care, can exaggerate that feeling.”


Prager’s direction and costuming deliberately exaggerates character, inviting the viewer in to search for clues, while her angles insist on distance. She hired a cinematographer to capture the movement, and invited the actress Elizabeth Banks to walk through the scenes, as if in a dream. She also interviewed a handful of the extras, some of whom were surprisingly open with her, telling stories of love and loss. Others spoke to her in character, improvising tales. She used the footage to create an immersive, three-channel installation at the Chelsea location, offering a mix of fiction and reality for anyone who enters.