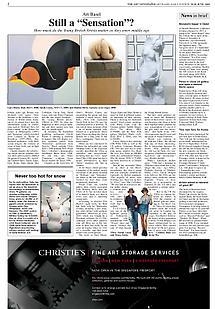 Fifteen years ago Britain was declared cool again. After decades in the doldrums, a generation of British artists barely out of art school burst onto the international scene. In exhibitions such as "Brilliant! New Art from London" at the Walker Art Center in Minneapolis (1995) and "Sensation", which travelled from London to Berlin to Brooklyn (1997-2000), they shocked audiences with their sexual imagery, the violence of some of their work, and its high visual impact.

Charles Saatchi, the advertising mogul and art collector who was their earliest patron, dubbed the group of around 40—including Damien Hirst, Tracey Emin, Gary Hume, Marc Quinn, Mat Collishaw, Gavin Turk, Sarah Lucas, Jake and Dinos Chapman and the late Angus Fairhurst— the "young British artists" (YBAs) in 1997. So what has happened to their critical standing and their market now that they are middle-aged?

In Australia, the Tasmanian gambling millionaire David Walsh is opening a museum in January that will display several signature pieces from "Sensation" purchased from Saatchi. These include Chris Ofili's 1996 painting Holy Virgin Mary, Collishaw's photographic installation Bullet Hole, 1988- 93, and Jake and Dinos Chapmans' sculpture Great Deeds Against the Dead, 1994.

Curators at the University of Ohio's Wexner Centre are researching the group and may organize a major survey. Sean Kelly (N2), who represents Gavin Turk in the US, says the curatorial interest is justified. "It was one of those moments when a lot of artists emerged fully formed as a generation. There hadn't been anything like that in Britain for a long time. It felt like a youthquake. There was so much talent."

Others are less convinced. In Britain, the influential art critic Jonathan Jones of the Guardian recently described the YBAs as talentless and insignificant, declaring their era "over". Apart from Chris Ofili, none has had a major retrospective at their "home" museum, the Tate in London.

At Art Basel, which provides a snapshot of the market, nearly two-thirds of the artists included in "Brilliant" and "Sensation" are listed in the fair catalogue. Around ten have their work prominently displayed.

White Cube, the London gallery most closely associated with Damien Hirst and the YBAs (J15), has devoted much of its stand to them, as it does at every fair, and is reporting strong sales.

According to director Tim Marlow, eight works by Hirst had been sold by Wednesday evening including a new stainless steel cabinet with synthetic gemstones, Memories of Love, 2010, which was bought by a European collector for £2.35m. Although seven other galleries who sell Hirst are at the fair, none of them had works by the artist on display when we visited, a possible sign that some dealers fear overexposure.

The work of Gary Hume, Tracey Emin and Marc Quinn is easier to find at different stands, an indication of their success. Hume is showing his trademark enamel block-colour paintings with White Cube, with the German gallery Sprüth Magers (B12; The Moon, 2009, £150,000) and the New York gallery Matthew Marks (A10; Baby Bird I, 2008, also for £150,000).

Tracey Emin is also showing with White Cube as well as the US gallery Lehmann Maupin (J8), who has sold two of three pink neons entitled You Made Me Love You, 2010, at £50,000 while her embroidered blanket, Why Be Afraid, 2009, £170,000, has been reserved by a Chinese collector.

Not all the successful YBAs are on show at Art Basel; nevertheless this was a group that was unusually commercial, especially by British standards. "The majority of artists were working class, there was no family silver," says Mat Collishaw. "We also had an aversion to taking public money, a common practice with artists who can't be bothered to make work that is sellable."

Collishaw was one of the tightknit groups of Goldsmiths students who mounted the 1988 "Freeze" show and which formed the core of what became the Young British Artists.

But now most galleries are keen to stress the distinctive nature of their artists' careers. "It was the press who chose to lump them together under a banner for easy consumption. It's not as if the glib label was the artists' idea," said Sadie Coles (H1) who represents Sarah Lucas and the estate of Angus Fairhurst.

"Hume was nothing to do with the YBAs. We did not find any of them interesting. He is interesting because he shows what painting can be…the way he finds very contemporary possibilities between figuration and abstraction," says Monika Spruth.

Hume's American dealers agree. "YBA had a meaning in 1990 but I don't think this is any longer the case," says Jeffrey Peabody, director of Matthew Marks (A10). David Maupin even believes the YBA tag has always been irrelevant outside England. "Tracey is more famous as a personality in England. In the US she's just considered a serious artist," he says.

But in the UK the YBAs as a group certainly do matter. In 1990 the number of British galleries showing at Art Basel was 16. Today it is twice that number while the overall art scene in London has exploded in the past 20 years. Tim Marlow believes the legacy of this generation of artists "is that Britain is no longer embarrassed by its visual culture. They opened the doors for the new generations of artists who followed them."