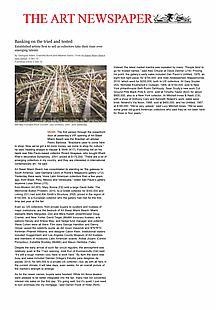 Banking on the Tried and Tested
Georgina Adam, Charlotte Burns and Melanie Gerlis

MIAMI. The first person through the oceanfront door at yesterday’s VIP opening of Art Basel Miami Beach was the Brazilian art adviser Pedro Barbosa: “Brazilians used to come here to shop. Now we’ve got a bit more money, we come to shop for cultura,” he said, heading straight to Hauser & Wirth (K17). Following hot on his heels was São Paulo-based collector Ricard Akagawa, who bought Bharti Kher’s decorative Symphony, 2001, priced at $175,000. “There are a lot of emerging collectors in my country, and they are interested in international contemporary art,” he said.

Despite the snow-induced travel chaos in Europe (flights have been disrupted out of hubs including Frankfurt, London and Basel, the fair’s ­mothership) some faithful followers made it to the fair. In the first hour, London collectors Anita and Poju Zabludowicz bought works including Barnaby Furnas’s Rock Concert, (Joy Division), 2007, for about $300,000 from Modern Art (K5). Mary Boone (F8) sold a large David Salle, The Mennonite Button Problem, 2010, to a Greek collector for $350,000 and Lelong (G1) had sold Kiki Smith’s Structure, 2005, priced in the region of €150,000, to a European collector who the gallery had met for the first time last year at the fair.

Despite the early arrival of such fair circuit regulars, the atmosphere was relatively quiet at the 11am opening. José Kuri of Kurimanzutto (G4) said: “It’s still a tough market—you have to work hard.” By 4pm the stand was busy and sales included Damián Ortega’s Estudio para desglose de piezas, 2010, for $45,000 to a private US collector—but, as with all fairs in the current climate, it will take days, even weeks, for an overall picture of the market’s strength to emerge.

As for the newer names, buyers were hesitant. While Art Nova dealers were pleased to be better integrated into the fair, many had not converted interest into sales on the first day. “It’s going well, but it’s quiet; I just need to turn promises into my mortgage,” said Darren Flook of Hotel (N29).