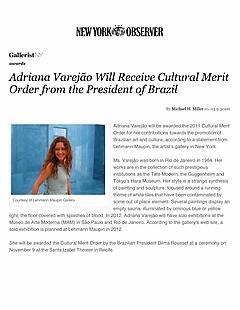 Adriana Varejão Will Receive Cultural Merit Order from the President of Brazil
By Michael H. Miller

Adriana Varejão will be awarded the 2011 Cultural Merit Order for her contributions towards the promotion of Brazilian art and culture, according to a statement from Lehmann Maupin, the artist’s gallery in New York.

Ms. Varejão was born in Rio de Janeiro in 1964. Her works are in the collection of such prestigious institutions as the Tate Modern, the Guggenheim and Tokyo’s Hara Museum. Her style is a strange synthesis of painting and sculpture, focused around a running theme of white tiles that have been contaminated by some out of place element. Several paintings display an empty sauna, illuminated by ominous blue or yellow light, the floor covered with splashes of blood. In 2012, Adriana Varejão will have solo exhibitions at the Museo de Arte Moderna (MAM) in São Paulo and Rio de Janeiro. According to the gallery’s web site, a solo exhibition is planned at Lehmann Maupin in 2012.

She will be awarded the Cultural Merit Order by the Brazilian President Dilma Roussef at a ceremony on November 9 at the Santa Izabel Theater in Recife.