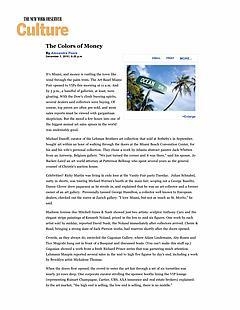 The Colors of Money
Alexandra Peers

It's Miami, and money is rustling the town like wind through the palm trees. The Art Basel Miami Fair opened to VIPs this morning at 11 a.m. And by 5 p.m., a handful of galleries, at least, were gloating. With the Dow's climb buoying spirits, several dealers said collectors were buying. Of course, top pieces are often pre-sold, and most sales reports must be viewed with gargantuan skepticism. But the mood a few hours into one of the biggest annual art sales sprees in the world was undeniably good.

Michael Danoff, curator of the Lehman Brothers art collection that sold at Sotheby's in September, bought art within an hour of walking through the doors at the Miami Beach Convention Center, for his and his wife's personal collection. They chose a work by Atlanta abstract painter Jack Whitten from an Antwerp, Belgium gallery. "We just turned the corner and it was there," said his spouse, Jo Backer-Laird an art world attorney at Patterson Belknap who spent several years as the general counsel of Christie's auction house.

Celebrities? Ricky Martin was living la vida loca at the Vanity Fair party Tuesday. Julian Schnabel, natty in shorts, was touring Michael Werner's booth at the main fair; scoping out a George Baselitz. Danny Glover drew paparazzi as he strode in, and explained that he was an art collector and a former owner of an art gallery. Perennially tanned George Hamilton, a collector well known to European dealers, checked out the wares at Zurich gallery. "I love Miami, but not as much as St. Moritz," he said.

Crowds, as they always do, encircled the Gagosian Gallery, where Adam Lindemann, Aby Rosen and Tico Mugrabi hung out in front of a Basquiat and discussed boats. (You can't make this stuff up.) Gagosian showed a work from a fresh Richard Prince series that was garnering much attention. Lehmann Maupin reported several sales in the mid to high five figures by day's end, including a work by Brooklyn artist Mickalene Thomas.

When the doors first opened, the crowd to enter the art fair through a set of six turnstiles was nearly 30 rows deep. One corporate curator strolling the sponsor booths lining the VIP lounge (representing Ruinart Champagne, Cartier, UBS, AXA insurance and real estate brokers) explained: In the art market, "the high end is selling, the low end is selling, there is no middle."