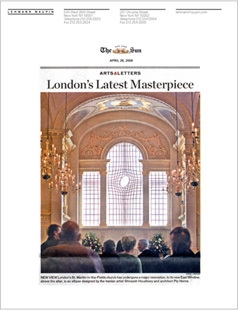 LONDON — St. Martin-in-the-Fields, perched on a corner of Trafalgar Square, is one of London's most extraordinary entities. And now, after a $69 million renovation that represents one of the most complex architectural overhauls in recent British history, the church is ready to welcome the public in grand fashion.

Eric Parry Architects has spent seven years on the site, which includes the church, designed by James Gibbs and consecrated in 1726, as well as a separate building (formerly containing a vicarage, vestry, and school), a churchyard, and vaults. Central to the project is the renewal of the church, which opened yesterday with a celebratory arts festival that runs through May 18. A splendid, humbling paean to religious glory, St. Martin-in-the-Fields is a masterpiece. Gibbs — who had been living in Rome and trained as a priest before moving into architecture — said that he wanted to build "the best London could offer to God." And indeed, he pulled out the stops. The basilica pays homage to a soaring Roman aesthetic tradition. There are strong Byzantine elements and curved, white marble typical of the Roman baroque.

But over the years, the interior had suffered. Linoleum floors and an unattractive color scheme were added at the beginning of the 20th century. The space appeared murky and dark because of the cheap postwar windows that had replaced the bombed-out originals. Now, the space has undergone a thorough cleaning, and the windows have all been replaced with hand-blown glass. The major addition to the church is the new East Window, above the altar. At its center is an ellipse, from which a swirling, geometric grid of stainless-steel frames radiates. Designed by the Iranian artist Shirazeh Houshiary and architect Pip Horne, it is reminiscent of Christian symbols, such as Jacob's Ladder and the cross. But its black frames also suggest an urban setting. "Somewhere twixt heaven and Charing Cross," St. Martin-in-the-Fields's Reverend Nicholas Holtam said.

This is an abstract and modern addition to the Church, which not everyone will like. But St. Martin-in-the-Fields is an important space that deserves an artistically rich addition. Handel once played there, and the venue is still one of the best in Britain for early Baroque and early classical music. The church hosts 350 free concerts a year, in addition to a wide range of events and programs.

Though the church itself is completed, construction continues on the other components of the site, which are slated to be finished in July. The labyrinthine space under the church (which served as burial chambers until the 1850s) has been completely renovated and flooded with light. When complete, this robust and elegant series of rooms will house the activities vital to the life of St. Martin's - a soundproof music rehearsal room (despite the fact that the Northern Line of the Tube runs 30 feet below), a green room, a music haIl, and plenty of activity space for the resident Chinese Community Centre.

The wondrous light illuminating the crypt is drawn down to the belowground area through a window design set into Church Path. Widened and repaved, the path includes a "light well," or oval shaft of glass that will also serve as an elevator to the crypt. Facing the church and crypt from across Church Path is the John Nash terrace, which has been gutted, cleaned, and refurbished as the new headquarters of the Connection, a homeless outreach program, with laundry facilities, classrooms, kitchens, dining, and social spaces.

No sensitivity to detail has been spared: Embossed on the handrail at the top of the light well is a site-specific poem by the poet laureate, Andrew Motion, written to engage passers-by with their surroundings. And the work has certainly pleased Prince Charles, who patronized the efforts. As he said in a statement: "Those who built the church in the 1720s were criticised for its great expense; two hundred and eighty years later, few capital investments have been so worthwhile. The church's openness to the world, its constant creativity and care of those in need, its international outlook and commitment to people of other faiths are of striking significance in our time."