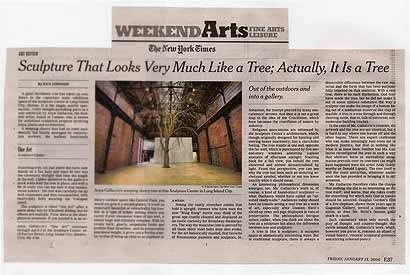 Sculpture That Looks Very Much Like a Tree; Actually, It Is a Tree
By Ken Johnson
p. E37

A giant deciduous tree has taken up residence in the capacious main exhibition space of the Sculpture Center in Long Island City, Queens. It is the single, quietly spectacular, richly thought-provoking piece in a solo exhibition by Anya Gallaccio, the Scottish artist, based in London, who is known for ambitious sculptural projects involving trees, plants and architecture.

A weeping cherry that had its roots accidentally but fatally damaged by construction workers, the leafless, luxuriantly branching tree, cut just above the roots, now stands on a flat base and rises 50 feet into the clerestory skylight that runs the length of the hall. Cables anchored to the gallery's brick walls hold the tree in place, and with a bit of study you can see how it was maneuvered indoors: the tree was carefully cut up with chainsaws and then reassembled, with heavy-duty bolts securing the V-shaped joints.

The sculpture is titled "One Art" after a poem about loss by Elizabeth Bishop, but its effects are multiple. First, there is the sheer physical presence. If you passed it in an ordinary outdoor space like Central Park, you would not give it a second glance; it is not an especially beautiful or remarkably big tree. But in a type of indoor setting where you rarely if ever encounter trees of this sort, it seems huge and infinitely complex. With its crusty bark; gnarly, serpentine limbs and profuse finer branches; and its presumably enormous weight, it gives you a feeling similar to that of being up close to an elephant or a whale.

Noting the tautly stretched cables that hold it upright, viewers who have seen the new "King Kong" movie may think of the great ape cruelly chained and displayed as an exotic curiosity for Broadway theatergoers. The way the muscular tree is pierced by all those shiny steel bolts may also evoke, for the art historically minded, that favorite of Renaissance painters and sculptors, St. Sebastian, the martyr pierced by many executioners' arrows. And then it is not a great leap to the idea of the Crucifixion, which here becomes the crucifixion of nature by industry.

Religious associations are enhanced by the Sculpture Center's architecture, which, though originally designed for hoisting and moving heavy machinery, has a churchlike feeling. The tree stands at one end, opposite the far wall, which is punctuated by five second-story windows admitting copious amounts of afternoon sunlight. Standing back for a full view, you behold the tree showered and almost dematerialized by light. From this perspective, you can see why the tree has been such an enduring archetypal symbol, whether or not you know exactly what it should mean.

An interesting philosophical dimension emerges, too. Ms. Gallaccio's work is, of course, a kind of found-object sculpture - what Duchamp would have called an "assisted readymade." Audiences today should have no trouble seeing a real tree as a work of art, especially after Damien Hirst's sliced-up cows and pigs displayed in vats of preservative. The philosophical intrigue arises, rather, when you think not about the tree as a sculpture but about the difference between tree and sculpture.

A tree is like a sculpture; it occupies space in aesthetically interesting ways. But in traditional sculpture, there is always a discernible difference between the raw material and the form that has been purposefully imposed on that material. With a real tree, there is no such distinction. God may have made the tree, but he did not make it out of some nontree substance the way a sculptor can make the image of a human being out of a nonhuman material like clay or marble. A tree is a tree through and through (leaving aside, that is, talk of universal, submolecular building blocks).

In the case of Ms. Gallaccio's creation, the artwork and the tree are not identical, but it is hard to say where one leaves off and the other begins. There are expert craftsmen who can make seemingly real trees out of modern plastics, but that is nothing like what is at issue here. Neither has Ms. Gallaccio reconfigured the tree in such a way that abstract form or surrealistic imagination prevails over its tree-ness (as might have happened were the artist Andy Goldsworthy or Donald Lipski). The tree itself is still the main attraction, whatever assistance she has provided in bringing it to our attention.

Ms. Gallaccio therefore risks the charge that nothing she did is as interesting as the tree itself; and worse, that she takes credit for something for which only God or nature should be admired. Douglas Gordon's film of a live elephant, shown three years ago at Gagosian Gallery, invited a similar criticism, as does Mr. Hirst's famous giant shark in a tank.

Such cautionary ideas only enrich the play of thought and counter-thought that swirls around Ms. Gallaccio's work, which, however you parse it, remains an object of visual beauty, visceral sculptural presence and stirring arboreal poetry.