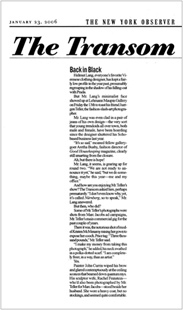 Helmut Lang, everyone’s favorite Viennese clothing designer, has kept a fairly low profile in the year past, presumably regrouping in the shadow of his falling-out with Prada.

But Mr. Lang’s minimalist face showed up at Lehmann Maupin Gallery on Friday the 13th to toast his friend Juergen Teller, the fashion-slash-art photographer.

Mr. Lang was even clad in a pair of jeans of his own design—the very sort that young trendoids all over town, both male and female, have been hoarding since the designer shuttered his Soho-based business last year.

Ah, but there is hope!

Mr. Lang, it seems, is gearing up for round two. “We are not ready to announce it yet,” he said, “but we do something, maybe this year—me and my office.”

And how are you enjoying Mr. Teller’s show? The Transom asked him, perhaps prematurely. “I don’t even know why, yet, it’s called Nürnberg, so to speak,” Mr. Lang answered.

But then, who did?

Some of Mr. Teller’s photographs were shots from Marc Jacobs ad campaigns, Mr. Teller’s main commercial gig for the past couple of years.

There it was, the notorious shot of model Kristen McMenamy raising her gown to expose her cooch. Price tag: “Three thousand pounds,” Mr. Teller said.

“I make my money from taking this photograph,” he added, his neck swathed in a polka-dotted scarf. “I am completely freer, in a way, than an artist.”

Painter John Currin wiped his brow and glared contemptuously at the ceiling sconces that beamed down quantum rays. His sculptor wife, Rachel Feinstein—who’d also been photographed by Mr. Teller for Marc Jacobs—stood beside her husband. She wore a heavy coat, but no stockings, and seemed quite comfortable.