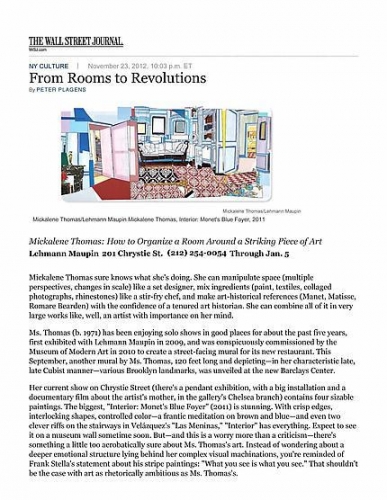 From Rooms to Revolutions
By Peter Plagens


Mickalene Thomas sure knows what she's doing. She can manipulate space (multiple perspectives, changes in scale) like a set designer, mix ingredients (paint, textiles, collaged photographs, rhinestones) like a stir-fry chef, and make art-historical references (Manet, Matisse, Romare Bearden) with the confidence of a tenured art historian. She can combine all of it in very large works like, well, an artist with importance on her mind.

Ms. Thomas (b. 1971) has been enjoying solo shows in good places for about the past five years, first exhibited with Lehmann Maupin in 2009, and was conspicuously commissioned by the Museum of Modern Art in 2010 to create a street-facing mural for its new restaurant. This September, another mural by Ms. Thomas, 120 feet long and depicting—in her characteristic late, late Cubist manner—various Brooklyn landmarks, was unveiled at the new Barclays Center.


Her current show on Chrystie Street (there's a pendant exhibition, with a big installation and a documentary film about the artist's mother, in the gallery's Chelsea branch) contains four sizable paintings. The biggest, "Interior: Monet's Blue Foyer" (2011) is stunning. With crisp edges, interlocking shapes, controlled color—a frantic meditation on brown and blue—and even two clever riffs on the stairways in Velázquez's "Las Meninas," "Interior" has everything. Expect to see it on a museum wall sometime soon. But—and this is a worry more than a criticism—there's something a little too acrobatically sure about Ms. Thomas's art. Instead of wondering about a deeper emotional structure lying behind her complex visual machinations, you're reminded of Frank Stella's statement about his stripe paintings: "What you see is what you see." That shouldn't be the case with art as rhetorically ambitious as Ms. Thomas's.