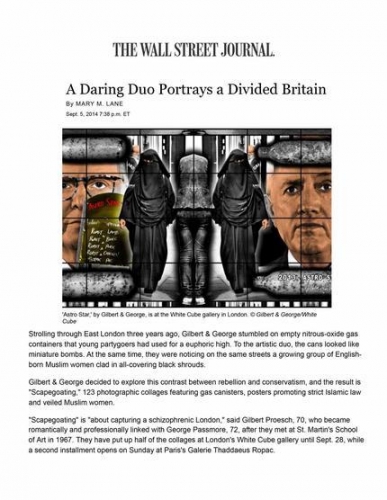 
Strolling through East London three years ago, Gilbert & George stumbled on empty nitrous-oxide gas containers that young partygoers had used for a euphoric high. To the artistic duo, the cans looked like miniature bombs. At the same time, they were noticing on the same streets a growing group of English-born Muslim women clad in all-covering black shrouds.


"Scapegoating" is "about capturing a schizophrenic London," said Gilbert Proesch, 70, who became romantically and professionally linked with George Passmore, 72, after they met at St. Martin's School of Art in 1967. They have put up half of the collages at London's White Cube gallery until Sept. 28, while a second installment opens on Sunday at Paris's Galerie Thaddaeus Ropac.


Gilbert & George are now almost household names in Europe. Their local pub bears a large mural honoring them. They have won the prestigious Turner Prize, represented the U.K. in the 2005 Venice Biennale, and their major 2007 Tate Museum retrospective ended at the Brooklyn Museum.


As an example of the duo's view of a divided Britain, Mr. Proesch pointed to "Astro Star," an 8-by-14-foot symmetrical work showing two veiled women circumventing a headless figure in skin-tight jeans. The artists' ghostlike faces and a local café menu, advertising such British fares as steak pie, surround them.


The artists have divided each picture into panels—a look Westerners might associate with stained glass windows, they say. The duo used only five colors: onyx, white, tan, yellow and red.


In "Puttees," a shrouded woman carries two shopping bags down a blood-red street. Beside her, Gilbert & George, distorted to resemble skeletons, raise their palms in supplicating pleas.


Both artists say the series expands on earlier work that cast a critical look at ideologies like white supremacy and Christian fundamentalism. "What's wrong with a godless religion built around having impeccable manners?" said Mr. Proesch, straightening his tie portraying frogs leaping atop green silk.


For 45 years, Gilbert & George have worn self-designed tweed suits. What began as a marketing aid is now part of an ethos that sees maintaining fastidious standards as a way to show spiritual respect for fellow humans, they say.


Gilbert & George express sympathy for the 2010 French ban on the burqa, the all-body shroud worn by certain Muslim women—a decision that caused much debate in Britain. "Is [the burqa] a wonderful expression of the tolerant society we live in, or are there dangers to it?" asked Mr. Passmore.


"We haven't shown something as political as these works before," says Thaddaeus Ropac, 54, who opened his gallery in Paris in 1990. "The French will embrace it. I just wonder how the members of these [Islam-practicing] ethnic groups will feel." So far he has heard of no protests.


The artists have always courted criticism with once-controversial themes such as homoeroticism or bodily fluids. The two touched on other topics as they gained fame, but English critics still referred to them as "fruits in suits" when they addressed nonsexual topics, they say. "It didn't matter what the subject was, it was 'gay art' and that wasn't acceptable," said Mr. Proesch.


In time the sexualized themes that brought them publicity have become accepted and even copied. That, the artists say, galvanized them to explore new subject matter: fundamentalism and what Mr. Passmore calls youthful "hooliganism."


The artists remain a tough sell in the U.S., say curators and dealers. They enjoy a cult following among some private American collectors—nearly all of whom own several works and have adequate space for their large-scale pictures, says their New York dealer, Rachel Lehmann. She recently closed a show in Manhattan of historical Gilbert & George videos. They weren't for sale; the exhibition was part of her long-term plan to glean more academic attention for the duo.


Brooklyn Museum director Arnold Lehman, known among curators for his niche artistic predilections, organized the only U.S. touring show of Gilbert & George's work in 1984 and 1985, as director of the Baltimore Museum of Art. "All that male frontal nudity... We had to do a lot of convincing to get museums to take the show" and secure the necessary corporate sponsors, he said.


For Gilbert & George's American devotees, salvation may lie in the South. Curator Bonnie Clearwater is planning a late-2015 Fort Lauderdale, Fla., exhibition to coincide with Art Basel Miami Beach, a mecca for collectors coveting controversy. Ms. Clearwater employed the same strategy last year to promote British artist Tracey Emin. The show was a hit, and Ms. Emin's prices have been climbing since.