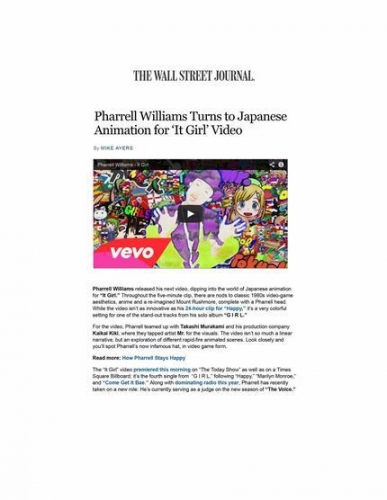 Pharrell Williams Turns to Japanese Animation for ‘It Girl’ Video
By: Mike Ayers


Pharrell Williams released his next video, dipping into the world of Japanese animation for “It Girl.” Throughout the five-minute clip, there are nods to classic 1980s video-game aesthetics, anime and a re-imagined Mount Rushmore, complete with a Pharrell head. While the video isn’t as innovative as his 24-hour clip for “Happy,” it’s a very colorful setting for one of the stand-out tracks from his solo album “G I R L.”


For the video, Pharrell teamed up with Takashi Murakami and his production company Kaikai Kiki, where they tapped artist Mr. for the visuals. The video isn’t so much a linear narrative, but an exploration of different rapid-fire animated scenes. Look closely and you’ll spot Pharrell’s now infamous hat, in video game form.


The “It Girl” video premiered this morning on “The Today Show” as well as on a Times Square Billboard; it’s the fourth single from  “G I R L,” following “Happy,” “Marilyn Monroe,” and “Come Get It Bae.” Along with dominating radio this year, Pharrell has recently taken on a new role: He’s currently serving as a judge on the new season of “The Voice.”