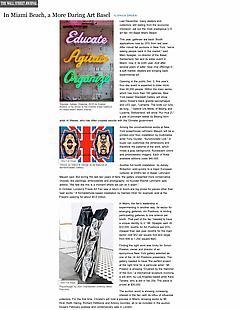 This year, galleries are back: Booth applications rose by 20% from last year. After robust fall auctions in New York, "we're seeing people back in the market," said Marc Spiegler, co-director of the Basel, Switzerland, fair and its sister event in Miami, now in its ninth year. And after several years of safer, blue-chip offerings in a soft market, dealers are bringing back experimental art.

Opening to the public Dec. 2, this year's four-day event is expected to draw more than 40,000 people. Within the main sector, which has more than 180 galleries, New York-based Skarstedt Gallery will show Jenny Holzer's black granite sarcophagus and LED sign, "Laments: The knife cut runs as long..." Galerie Urs Meile, of Beijing and Lucerne, Switzerland, will show "Kui Hua Zi," a pile of porcelain seeds by Beijing-born artist Ai Weiwei, who has often crossed swords with the Chinese government.

Among the unconventional works at New York powerhouse Lehmann Maupin will be a printed-vinyl floor installation by multimedia artist Tony Oursler, "Synchronistic Lick." A buyer can customize the dimensions and therefore the patterns of the work, which mixes a gray background, fluorescent colors and photorealistic imagery. Each of three available editions costs $40,000.
Another full-booth installation, by Ashley Bickerton, sold quickly to a major European collector at 2008's fair in Basel, Lehmann Maupin said. But during the last two years of fairs, the gallery presented more conservative choices, like paintings, embroideries and photography, co-founder Rachel Lehmann said, adding: "We feel like this is a moment where we can do it again."

In October, London's Frieze Art Fair saw a return to boom-era big prices for pieces other than "wall works." A formaldehyde-based installation by Damien Hirst, for example, sold at the Frieze's opening for about $5.6 million.

In Miami, the fair's leadership is experimenting in another way: Its sector for emerging galleries, Art Positions, is limiting participating galleries to one artwork per booth. That part of the fair "needed to have a unique identity to it," Mr. Spiegler said. At $10,000, booths for Art Positions are 20% cheaper than last year (booths for the main sector cost $52 per square foot and range from 646 to 1,292 square feet).

Finding the right work was tricky for Simon Preston, owner and director of an eponymous New York gallery selected as one of the 14 Art Positions presenters. The gallery needed to have "the perfect project at the right time for a particular artist." Mr. Preston is showing "Crushed by the Hammer of the Sun," a mechanical