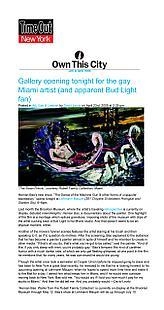 Last month the Brooklyn Museum, where the artist's traveling retrospective is currently on display, debuted miamiHeights: Hernan Bas, a documentary about the painter. One highlight of the film is a montage which splices grandiose, imposing shots of the museum with clips of the artist sucking back a Bud Light in his Miami studio. And that doesn't seem to be an atypical moment, either.

Another of the movie's funnier scenes features the artist staring at his brush and then speaking to it, as if to question its motives. After the screening, Bas explained to the audience that he has become a painter's painter almost in spite of himself and his intention to create in other media. "If that's all you do, that's what you've got to be called," said the painter. "Kind of like, if you only sleep with men, you're probably gay." Bas's tempers this kind of carefree humor with a much darker side, of which we only get fleeting glimpses; at one point in the film he mentions that, for many years, he was convinced he would die young.

Though the artist once took a semester at Cooper Union before he stopped going to class and has been to New York a great deal recently, he revealed to me that he is looking forward to his upcoming opening at Lehmann Maupin, when he hopes to spend more time here and make it to the Met for a day. I asked him what keeps him in Miami, and if he would ever consider moving back to New York. Bas told me, "You would cry if I told you how much I pay for my studio in Miami." And then he did tell me. And you probably would.—David Levitz

"Hernan Bas: Works from the Rubell Family Collection" is currently on display at the Brooklyn Museum through May 12. Bas's show at Lehmann Maupin will be up through July 10.