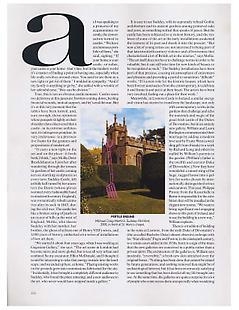 As I was speaking to a princess of my acquaintance recently, the conversation turned to castles. "We have an enormous portfolio of them," she said, sighing. "If your home is your castle - or rather, your castle is your home – that's fine, but in the modern world it's a matter of finding a point to having one, especially when life really revolves around cities. You need to see them in a new light or get rid of them." I nodded in sympathy. "And if my family is anything to go by," she added with a wrinkle of her splendid nose, "they can be divisive."

True, this is not an obvious castle moment. Castles seem too defensive at this juncture: barriers coming down, healing financial wounds, mutual support, and let's-end-the-war. But it's at this very moment that the tables have been turned, and, sure enough, those optimists whose parapets sit lightly on their shoulders have discovered that a castle - in its extreme architecure, its outrageous grandeur, its very irrelevance - is a provocative frame for the gestures and propositions of modern art.

"It casts a new light on the art and on the place - it feeds both, I think," says Mollie Dent-Brocklehurst as I join her after wandering through the romantic gardens of her castle, coming across startling sculptures at every turn. Sudeley Castle, left artfully half ruined by her ancestors the Dents (whose gloves warmed every fashionable hand in nineteenth-century England), was romantically rebuilt centuries after its sack in 1643, during the civil war. The castle lies like a broken string of pearls in an oyster of hills in the west of England. Mollie, who shares Sudeley with her mother, her brother, the ghost of at least one of Henry VIII's wives, and 1,000 years of history, embarked on a series of installations of new art there.

"We started it about four years ago, when I was working at Gagosian Gallery," she says. "The art scene in London had become more and more global, but it was all very urban and confined. So my co-curator, Elliot McDonald, and I thought it would be interesting to take that energy outside into the landscape, and we ended up here, at home." Placing existing works on the grounds grew into commissions fabricated for the site. "Incidentally, it has brought a completely different audience to Sudeley, who found the place amazing, and a new audience to the art, who never would have stepped inside a gallery."

It is easy to see Sudeley, with its supremely refined Gothic architecture and its ancient gardens among primeval oaks and yews, as something settled that speaks of peace. But the castle has been subjected to a violent history, and the violence of some of the art in the early installations awakened the tremors of its past and shook it into the present. "But now a lot of young artists are not interested in being part of that late-twentieth-century violence and offensiveness that characterized a lot of British art in the nineties," says Mollie. "The art itself does not have to challenge norms in order to be valuable, but it can still take time for new kinds of beauty to be recognized as such." The Sudeley installations have been part of that process, coaxing an atmosphere of enjoyment and pleasure and providing a portal to sometimes "difficult" works. "It's a new role for the historic houses, which have been forever sanctuaries from the contemporary, to celebrate it and frame it and put it at their heart. The artists have been very involved, feeling out a place for their work."

Meanwhile, at Lismore Castle in Ireland, a similar energy and vision has started to transform the landscape, not only with contemporary works in the gardens that challenge and echo the materials and magic of the great Irish castle of the Dukes of Devonshire, but in an entirely new gallery. William and Laura Burlington commemorated their marriage by adding a modern love seat by Franz West (a wedding gift from friends) to a work by Richard Long and others installed by William's parents in the garden. (William's father is the twelfth and current Duke of Devonshire.) Now they have remodeled a ruined wing of the huge, rugged house into a gallery for works chosen by internationally distinguished critics and curators. This year, Philippe Pirotte from the Kunsthalle in Berne is responsible for the exhibition that will be installed in the elegant new rooms. "We want to bring significant and engaging shows to this part of Ireland, and to use the building in a new way," William explains.

There is a tradition of building in the ruins at Lismore, from the sixth Duke of Devonshire's (the so-called Bachelor Duke) almost obsessive redesign with his "Star-chitects" Pugin and Paxton, in the nineteenth century, to a tennis court added in the 1930s, but it is a sign of the times that the new galleries are conceived in a public rather than a private spirit. The architecture of the galleries is, William says modestly, "reversible," a fresh new skin stretched over the original bones. "Nothing has been done that cannot be erased by future generations, and nothing removed that might be of archaeological interest, but it has been enormously satisfying to see something that has been derelict all my life brought into use. At the same time, the galleries are quite a surprise for a lot of people who come across them unexpectedly when wandering through the garden - we wanted the entrance to be subtle, almost hidden - and it's good to see the kind of cross-fertilization that they bring. The garden people find themselves looking at modern art they never expected to see, while the art crowd find themselves staring in amazement at some huge, ancient magnolia tree in flower."

Houghton Hall in Norfolk is about as close to a work of art in itself as domestic architecture gets in England. Symmetrical, balanced, the fourteenth-century structure was gilded by William Kent (landscaper, architect, and the greatest decorator of the l720s and perhaps of any twenties). "It was considered incredibly vulgar and over-the-top at the time," David Cholmondely, the self-effacing present marquess, has said. The hands of architects and designers have brought magic to Houghton for centuries, from Kent to the marvelous Bannermans, the husband-and-wife team of dreamers on the grand scale whose oak buildings have transformed the gardens of Arundel Castle and Prince Charles's garden at Highgrove, and who raised enormous Gothic arches and as many eyebrows all over the gardens of contemporary England. Now David has raised a new kind of monument in living beech trees to his grandmother Sybil, who adored the house and garden at Houghton. Artist Anya Gallaccio has signed the landscape with Sybil's signature, writ not just large but huge, scribbled in plantings of copper beech across the garden. "I really enjoyed working with David because he has a vision of the future," says Gallaccio. "He understood that with real gardening you have to give it time. Historically, people were planting things for future generations, with the idea of the family continuing on. They were taking the distant view - not instant gratification."

Though the planting itself is over-the-top (of course, that is the only place you can see it from), it's in an incredibly low-key way. In these castle landscapes on a vast scale, over-the-top seems to be just right. Horace Walpole, youngest son of Houghton's first owner, wrote in his 1780 "Essay on Modern Gardening" that Kent "leaped the fence and saw that all nature was a garden." These castles' current inhabitants have leaped into the future and found that all nature is a gallery.