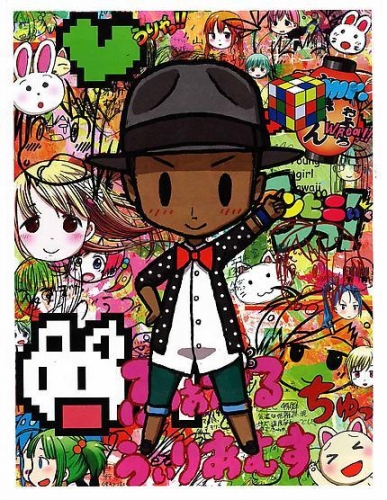 The Art of Being Pharrell: Mr.
by: Diane Solway


A former protégé of art star Takashi Murakami, the Japanese artist Mr. is best known for his devotion to otaku, the Japanese subculture obsessed with manga, anime, video games, and fictionalized prepubescent girls. His drawings, paintings, and sculptures express an idealized  view of childhood and his unending nostalgia for it. Based in Saitama, Japan, Mr. (whose moniker was inspired by the nickname of a Japanese baseball star) recently began incorporating posters, graffiti tags, and other elements of Western street art into his work. This collaboration with Williams, he says, allowed him to explore African-American culture, something completely outside his realm of experience. Though he and Williams are friends, the 44-year-old artist decided to work from an image of the singer he found on the Internet. “There’s a style of drawing anime characters called mini kyara (mini characters),” explains Mr., whose first museum show opens in late fall at the Seattle Art Museum. “The style is pretty popular, and the rules are established to the point where you could write  an instruction manual on how to do it. I followed the guidelines and applied them to Pharrell. He’s someone who strikes a lot of symbolic poses, so I wanted to emphasize that idea.”