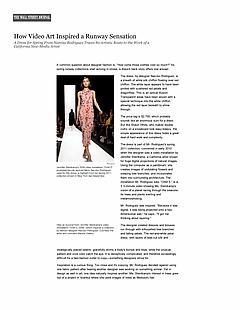 A common question about designer fashion is: "How come those clothes cost so much?" As spring runway collections start arriving in stores, a dress's back story offers one answer.

The dress, by designer Narciso Rodriguez, is a sheath of white silk chiffon floating over red chiffon. The white layer appears to have been printed with scattered red petals and dragonflies. This is an optical illusion: Transparent areas have been woven with a special technique into the white chiffon, allowing the red layer beneath to shine through.
The price tag is $2,700, which probably sounds like an enormous sum for a dress. But like Shaun White, who makes double corks on a snowboard look easy-breezy, the simple The dress is part of Mr. Rodriguez's spring 2011 collection, conceived in early 2010 when the designer saw a video installation by Jennifer Steinkamp, a California artist known for huge digital projections of natural images. Using the computer as a paintbrush, she creates images of undulating flowers and swaying tree branches, and incorporates them into surrounding architecture. The installation Mr. Rodriguez saw, "Orbit 5," is a 3 ½-minute video showing Ms. Steinkamp's vision of a planet racing through the seasons, its trees and plants swirling and metamorphosing.

Mr. Rodriguez was inspired. "Because it was digital, it was being projected onto a two-dimensional wall," he says. "It got me thinking about layering."

The designer created dresses and blouses run through with silhouetted tree branches and falling petals. The red-and-white petal dress, with layers of bias-cut silk and strategically placed seams, gracefully skims a body's bumps and blips, while the unusual pattern and vivid color catch the eye. It is deceptively complicated, and therefore exceedingly difficult for a fast-fashion outlet to copy—something designers strive for.

Inspiration is a curious thing. Too close and it's copying. Mr. Rodriguez decided against using one fabric pattern after hearing another designer was working on something similar. Yet in design as well in art, one idea naturally inspires another. Ms. Steinkamp's interest in trees grew out of a project in Istanbul where she used images of trees as Medusa's hair.

Ms. Steinkamp hasn't yet seen Mr. Rodriguez's collection. "I don't have any of his clothes," she notes. At work in San Diego on a project based on Madame Curie's passion for flowers, the artist noted she was wearing sweat pants, tennis shoes and a sweater that "I'd have to look at the label" to identify.

Mr. Rodriguez shot to household fame back in 1996, when he designed Carolyn Bessette Kennedy's wedding dress. He's known as a minimalist for his clean designs. These days, his fragrance and cosmetics lines that help pay for the clothing end of the business. Even on a $2,700 dress, the profit margin is far lower than on accessories or cosmetics.

Mr. Rodriguez began work on the dress during a weekend last spring, when he went to his studio and yanked out wide sheets of graph paper used for drawing patterns. He sketched petals and wavy lines. "I obsessed on it for weeks," he recalls.

He had been digging through his archives, reviewing clothes Ms. Bessette, Kate Moss and others had worn in the 1990s, and envisioned fabrics that would have the feel of vintage without seeming faded. He telephoned Filippo Binaghi, a textile maker near Como, Italy, who provides silks for other designers including Stefano Pilati, at Gucci Group's Yves St. Laurent label. Mr. Binaghi knew of a special weaving technique that would help Mr. Rodriguez create shapes in fabric and then layer them, resulting in the look of falling petals.

Mr. Rodriguez mailed huge sketches to Italy. The two men talked frequently. Fabric samples flew across the Atlantic. "There was a great deal of back and forth," the designer says.

Mr. Binaghi's family company, Lorma SRL, specializing in silks and fine fabrics, has been around for five generations. They started as traders, then began weaving near Como, where high humidity helped in the weaving of fine silks. Until World War II, the company not only wove but also produced the silk, Mr. Binaghi says; today, much of the world's silk thread is produced in China, even if it is woven into fabric elsewhere.

Lorma competes with suppliers in China by offering creativity and the small quantities needed by luxury designers, who can't use mass-retail yardage—and hence can't demand mass-retail discounts on textiles. Lorma prides itself on creating new fabrics, and it invests heavily in new technology. It owns a loom that can weave without "repeats," allowing it to weave the equivalent of a painting onto a piece of fabric. It costs about five times what a regular repeating loom costs, Mr. Binaghi says.

"We are more artists," says Mr. Binaghi, noting that his weavers train for from two to five years. "It's like cooking. You have to visualize what you want out of the fabric."

Back in New York, there was a tremendous last-minute rush by pattern cutters, seamstresses and assistants to get Mr. Rodriguez's spring collection finished. Italian factories take vacation during much of August. Just as New York designers are scrambling to sew up their spring collections. The fabric for sample clothes trickled in, one color at a time, as Lorma finished them and mailed them back across the ocean. In preparing collections, airmail costs pile up—there's no time to wait for a ship to deliver fabrics and notions. Mr. Rodriguez's seamstresses sewed what they could as the fabrics arrived. "The one I needed the most came at the end," says Mr. Rodriguez. That was the petal fabrics.

After he'd begun work on the dress, Mr. Rodriguez got in touch with Ms. Steinkamp's New York gallery, Lehman Maupin, and then with Ms. Steinkamp herself in the fall, to introduce himself and let her know about his collection. Ms. Steinkamp says she believes it's the first time she has inspired a fashion designer. It's flattering, she says, but concedes she would have been less enthusiastic about inspiring one of her own artistic competitors. "If he was a video artist, I'd have reservations," she says.